The Ending of a Vast Conspiracy

THEENDING OF A VAST CONSPIRACY

From The Planetary Activation Organization (pao@hawaii.rr.com).  Article taken from:  http://www.paoweb.com/sn021704.htm.  Published by permission from PAO. 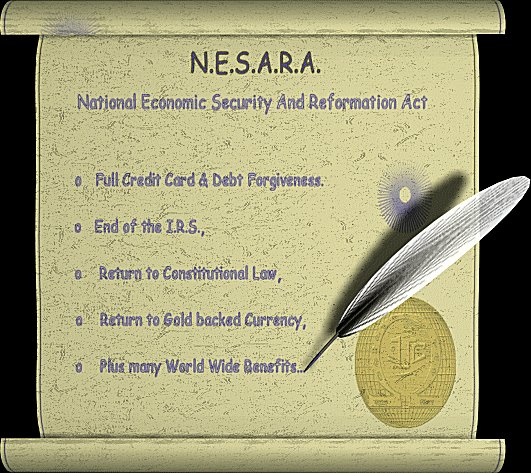 Greetings, Dear Hearts! We come today with more to tell you. As you look closely around your world, you can see a growing tide turning against your last cabal. This gathering momentum is an indication of the decreasing ability of this last dark cabal to carry out its heinous agenda. This is permitting our Earth allies and certain major governments to move forward with plans to remove this cabal from its current position of power. As noted in other reports, a new financial and monetary system, based on a shake-up of your global society’s wealth, is ready to be implemented. What is preventing this from happening is merely the requisite fall from power of this last dark cabal. To this end, we are working closely with your Ascended Masters to ensure our Earth allies’ swift success. As we speak, the final parts of a most complex grand design are beginning to fall into place. These include the stationing of various key military, diplomatic, and banking personnel in strategic parts of your globe. When these are in place and the proper ‘go’ codes can be given, a wonderful surprise will then await you.

This ‘surprise’ will involve the ending of a vast conspiracy that got underway in North America during the first decades of your nineteenth century. The first outward manifestation of this conspiracy was the assassination of your President Lincoln followed by the annexation of a large section of the American government in the immediate post-Civil War period. This present last cabal is the strange stepchild of this age-old and ill-intentioned conspiracy, the forefathers of which were involved in the unleashing of the two deadly world wars in the early twentieth century. Their ultimate purpose-as also noted previously-was to rid themselves of their off-world overlords and begin a global dictatorship. When these plans were seriously challenged in the 1960s, they assassinated President Kennedy. However, this covert attempt to maintain power only lasted until the turning of the millennium when it became necessary to resort to a more blatant form of their highly illegal shenanigans. This created the strange events of your 2000 Presidential election and the even weirder occurrences of September 11, 2001. The die was cast for a last crazy run at grabbing global power.

This power-grab was not merely an Anglo-American procedure: it deeply involved many multi-national corporations, financial institutions, and a large number of like-minded politicos. This ‘octopus’ has its tentacles within companies and government in most nations of your world that gives it an enormous and largely unsuspected power base. Uncovering this extensive infiltration was an immense and tedious affair and our assistance was of great help to our Earth allies. Rooting out all the co-conspirators became a lengthy operation, but one that has finally been accomplished. We now stand ready to unmask the members of this broad conspiracy. Our search also allowed us to discover the manner in which they operate as well as the sources of their major financial holdings. Armed with this information, we have been goading them into devising new and unusual methods of maintaining a trickle of their former immense wealth. Those financial resources seized by our Earth allies are to be redistributed as part of the 1998 agreements.

As these events proceed, many issues that have been hidden from view by this cabal over the last two years can once again begin to see the light of day. This allows many in North America to perceive more clearly the manner in which this last cabal seized power and then proceeded to use it to carry out illegally their many dark agendas. However, it has also permitted our Earth allies to regain and strengthen many positions of power lost over the past four decades, and this in turn allowed your Ascended Masters to formulate a more direct role for our first contact personnel. In short, this positive tide has shown us how much all of you support and welcome what is almost ready to happen. We view these developments not so much as a shift of power but more as a ‘quiet revolution’ of global proportions that is preparing your world for First Contact. The resulting new world that you helped to give birth to will be able to willingly accept our presence and the message to be delivered to you by the Ascended Masters and by their servants, the Galactic Federation of Light.

This is a time when much is still happening behind closed doors. The openness we wish for cannot yet be put into operation because of the nature of the final events needed to complete this last stage of your quiet revolution. A secret government still operates from an extensive power-base. Even in its diminished form, it is still a formidable foe for our Earth allies. Only if truly necessary can we intervene at a level that can quickly oust them from power. This mission is to be a First Contact only, and not a military operation. We do not want to alarm you, nor to give these reprobates the opportunity to appear to be your defenders against us. This dark cabal is truly an ill-intentioned group whose sole motivation is to grab global power and to manifest their despotic and immoral agenda. Every opportunity to redeem themselves has been extended to these black hearts, but to no avail. The full extent of their malfeasance will become apparent when all the details of their malevolent acts are made public.

A crucial component of what is happening at present is you. Each of you needs to remain calm and steadfastly committed to your noble cause. This dark cabal wants you to feel powerless and to believe in their invincibility as portrayed by the media. This is why it is vital that you maintain your information networks. These are allowing many to learn what the media does not wish them to know. This can help your community to reduce the fear, despair, and apathy that this cabal is working hard to generate in you. You can counter their influence by using your news and information networks to keep the truth alive. Always remember how powerful you really are and use your knowledge to ground the Truth into your communities. Keep yourselves firmly committed and unswervingly focused upon your inevitable victory!

Be aware that you are in the process of a significant shift in your consciousness that is exposing many of you to concepts and facts that you once considered either ludicrous or highly improbable. Now you have come to a point where these truths can no longer be ignored. Others among you have long known of these things but have been unable to spread them to a wider audience. However, opportunities to share this information with wider audiences are increasing. This is founding an ever-growing community that seeks for ways to re-establish morality in all aspects of your lives-personal, business, and political affairs-and to bring your world back into alignment with Heaven. These developments please us and make us realize how important the completion of this First Contact mission is to your world.

First contact is not only a major watershed in your history. It is also the time for those who have long sought a new way to be heard. Those embodying this quiet revolution have also-gratifyingly-been open to the concept of First Contact. This period can consequently be used to learn many astonishing new facts. Thus, we ask each of you to prepare yourselves for this. Understand that this great consciousness-shift makes the coming changes and your First Contact inevitable. Look upon these events as the manifestations of the great ‘winds of change’ that we have been describing to you over the past few weeks. This transformation of your world can unite all of you as never before. It will give you your freedom, and bring you all the benefits that flow from your return to a sacred personal sovereignty.

Today we continued our discussion of what is occurring on your world. We ask you to remain calm and centered and to inform your community, when necessary, about the truth concerning the events surrounding them. Know in your heart that a wonderful, glorious change is currently underway. We now take our leave. Blessings, dear Ones! Know in your Heart of Hearts that the perpetual Supply and infinite Abundance of Heaven is Yours! So Be It! Selamat Gajun! Selamat Kasijaram! (Sirian for Be One! Be Blessed in Love and in Joy!)