The Sun Is Cold, II

Excerpt of Chapter 3, "Magnetism, the Universal ‘I AM’ ", from the book "Other Tongues, Other Flesh" (1) by Dr. George Hunt Williamson.

The first body is the Sun (acting as a nucleus).  Over one hundred years ago, in 1854 [sic] (2), the eminent astronomer Sir William Herschel suggested that the Sun may be inhabited and that the inhabitants may no more suffer from the intense heat than those who live in the tropical regions of Earth!  He believed the Sun to be cool body, not a hot, flaming gas ball.

Since it has been shown that the satellite planets are magnetic in nature,[Note of Editor: he refers to a previous dissertation in this Chapter]it is only right to assume that the governing body that rules those planets is also magnetic in nature.  So, we might say that the Sun is the magnetic "brain" or ganglion of our entire Solar System.  Its forces are the directing intelligence of all the functions of our System.  It is from this great central, nuclear body that the planets draw their magnetic energy so that they, too, may generate forces.

The Sun’s vortex is very intense as would be expected of such a huge body, and it must extend to the very outer limits of the System.  Its atmosphere has three main layers:  the chromosphere, the reversing layer and the photosphere.  Completely enveloping these layers is the corona.  When photographed in hydrogen light the Sun displays its magnetic structure very well.  Such a photograph shows a grainy effect very similar to that produced when iron filings are sprinkled in a magnetic field.

Scientists today state that the Sun is a gigantic atomic furnace radiating a tremendous amount of heat to the satellite planets each second.  The temperature at its surface is said to be thousands of degrees, and the internal temperature is supposedly in the millions of degrees.  However, it is unexplainable how superheated gases can act magnetically.  For it is an elementary fact of physics that a substance loses its magnetism when heated!  Since astronomers have definitely recorded magnetic effects upon the Sun, we have a direct conflict between the Sun’s true nature and the suggested temperature.  This conflict only indicates that the Sun is not the superheated mass of gases that scientists think it is, but rather a cool body as Herschel said it was.

There is much evidence to prove that the Sun is, indeed, a cool body.  The process of determining the Sun’s temperature is very complex and involves the radiation laws of physics.  Fundamentally, here is how such temperatures are determined: the radiation of the body per square centimeter per second times the body’s effective temperature quadrupled equals the rate of radiation quadrupled times the body’s luminosity divided by its diameter squared.  In solving for the Sun, ones comes up with an average of fifty-nine hundred absolute degrees.  The mathematics involved is agreeable, but astronomers base their calculations on two assumptions:

First, they assume the Sun is a perfect radiating body; second, and most important, they assume that the Sun is radiating heat!  This is because they believe that heat on Earth, as well as heat on other planetary bodies, comes directly from the Sun.  People feel the heat when they stand in sunlight, so they say the Sun must be a burning mass radiating that heat.  That is like saying a radio transmitter radiates sound waves because when we turn on our radios, we hear sound.  But we know that such a transmitter radiates radio waves, and that these waves are turned into sound inside the radio!

In 1543, a great comet came closer to the Sun than any previous comet had and this was repeated by another comet in 1882.  They actually entered the Sun’s corona, which supposedly has a temperature of one million degrees absolute.  These comets traveled over one million kilometers through this blazing corona and emerged unscathed with no change in velocity or direction.  If the Sun is radiating heat, why didn’t these comets instantly disintegrate on entering a tremendous heat of one million absolute degrees?  Surely nothing could survive such a treatment!

Astronomers have told us that the planet Mercury is devoid of life because it is only thirty-six million miles from the Sun.  They have told us that if Mercury where any closer, it would turned into "nothingness" long ago.  How then did the two comets survive without at least showing some effects of their journey through the Sun’s corona?  We must conclude that the answer is that the sun does not radiate heat, as such!  Therefore, it cannot be any kind of a super-hot body.

The prominences supply us with some more proof of the above conclusion. These prominences are said to be hydrogen gas explosions and first appear in the Sun’s photosphere.  There are many theories, but as yet astronomers have been puzzled over their origin.  The behavior of these so-called hydrogen clouds of gas contradicts one of the oldest and supposedly, most stable law of physics …, Newton’s law of gravity.

Some prominences travel at the unbelievable speed of 450 miles per second and reach an altitude of one million miles; that’s one hundred ninety-one thousand miles more that the Sun’s diameter.  To add to the oddity of this phenomenon is the fact that these prominences rise to fantastic heights, and then just "hang" in midair, unsupported, in complete defiance of Newton’s law of gravity!  Others appear to "materialize" from nowhere, and hang motionless.  Surely the Sun with all its tremendous mass and "pulling" power could bring these prominences down again if they were composed of hydrogen gas.  Astronomers said they are composed of such gas because the spectroscope has labeled them such.  But the spectroscope is very inaccurate because between the Sun’s atmosphere and this instrument, the atmosphere of the Earth intervenes, and the upper atmosphere of our planet contains almost pure hydrogen.  This could be the hydrogen that astronomers say is on the Sun. 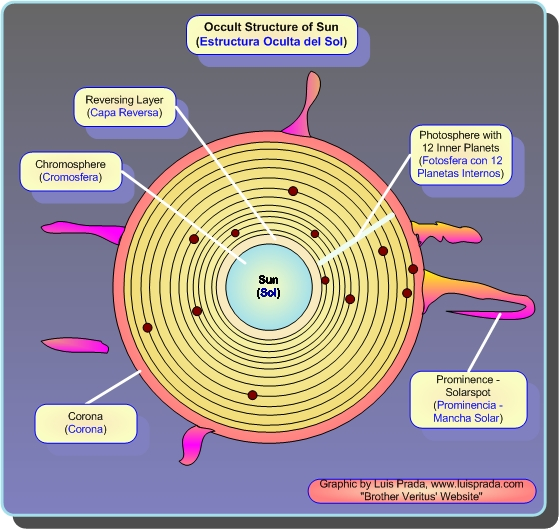 The prominence force of the Sun is similar to the auroral force emanating from the polar vents of the Earth.  The auroral force is known as the aurora borealis in the Northern Hemisphere, and the aurora australis in the Southern Hemisphere.  The names "northern" and "southern" lights are also given to this phenomenon.  This Earth force, which is continually being sent into the atmosphere, has the exact characteristics of the prominence force of the Sun.  Although it is continually emanating from the Earth, it is only seen at certain times when atmospheric conditions are right.

The auroral and prominence force are identical.  Under the thick atmosphere of the Sun are hidden planetary bodies that are emanating aurora forces known on the Sun as prominence forces.  The fact that there are planets under the Sun’s photosphere is also evident from the fact that in atomic structure the electrons are balances by an equal number of protons within the nucleus.  This makes a balanced system.

The prominence forces manifest in the atmosphere of the hidden, or inner, planets pass through their electromagnetic field, then manifest once again in the atmosphere of the Sun.  Then what about the so-called hanging prominences which "materialize" from nowhere in the upper atmosphere of the Sun?  The solution to this baffling question can be found easily.  When the auroral forces of the outer planets (Earth, Mars, etc.) pass through their vortex or electromagnetic field, they are ultimately drawn onto the great Sun body where they manifest.  At this stage, astronomers observe the "hanging prominences" which "materialize" from nowhere!

Another puzzle that has confronted astronomers, is that some sunspots appear to have polarity and some prominences are pulled mysteriously toward certain sunspots.  Prominences and sunspots have already been shown to be manifestations of the auroral activity of the hidden or inner planets under the Sun’s photosphere.  There are twelve inner planets and twelve outer planets.

Astronomers ask why sunspots arise at the more or less irregular intervals of eleven years, and why do first spots of a new series appear in high altitudes, and why is there a slow progression of the spots toward the solar equator as the sunspot cycle advances, and why is there a change in polarity of sunspots on alternate cycles?  The answers to these questions will give an accurate and complete theory of sunspots, and the answers lie in the fact that the inner or hidden planets create these conditions by their periods of rotation and revolution.

Heat and light are effects of the positive rays of the Sun.  Heat is felt on the Earth because the Sun’s positive rays intersect with its negative atmosphere and crust causing a friction or change in the quality of particle motion given off as heat radiation as a result of this friction.  The effect of the Sun’s rays on the Earth’s atmosphere is also responsible for the phenomenon of visible light that results from a different kind of particle motion.

The eyes are sensitive only to positive light rays reflected from negative substance; thus light is an interaction of negative and positive forces.  The Sun does not send us heat and light, although it is responsible for its manifestation on Earth; the Sun sends only positive lines of force which interact with the negative crust and atmosphere of the Earth to produce the phenomena of the electromagnetic spectrum, which includes heat and light.

Since distance from, and nearness to the Sun have nothing to do with whether a planet is "boiling" or "frigid", we can immediately see that all planets in our Solar System have nearly the same climate.  The Earth does not enjoy perfect climate because it is unbalanced magnetically.

What has been learned from space visitors about our Sun is not really anything new, but only a return to the ageless wisdom possessed by the Earth’s most ancient races.  These students of the long ago said that the true color of the Sun was blue, and it is interesting to note that the musical note of blue is Sol, a name for the Sun itself!

Back to First Part

1. Other Tongues, Other Flesh, by Dr. George Hunt Williamson (1926-1986).  The book was first published by Amherst Press, Amherst, WI, USA, in 1954.  The first reprint was in 1959 by Neville Spearman Ltd., London, England.  The second reprint was by BE Books Albuquerque, NM in 1991.  Currently this book is out-of-print.  You can order copies of the 1991 edition from TheAquarian Perspectives Inter-planetary Mission.

2. Correction:  William Herschel died in 1822, his postulation of a cool sun was given prior to this year, not in 1854, as mistakenly Williamson wrote in his book.