Soul Journey From Urantia to Paradise

Graphic Journey of the Soul Based on the Book of Urantia

Published in this website on January 12, 2015. All illustrations by the author.

This is not intended to be an in-depth narration of the journey to Paradise, only the presentation of the graphic material for better reference when reading the respective documents in the Urantia Book. This is the main intent and purpose of this publication. For detailed information consult the Urantia Book, Documents 14 and 15.

All graphics shown in top view as in viewing the capitals and their planetary clusters from above. It was chosen to make schematic representations rather than artistic interpretations for a clearer illustration of the sacred geometries of the capitals and their planetary clusters. The graphics are not made to scale and proportion. The orbits are elliptical but here they are shown circular for convenience of drawing.

Download the graphics only here in version PDF. The images here are more amplified: soul_journey_from_urantia_to_paradise_graph_only.pdf

First I present a schematic representation of the whole universe so we can locate planet Urantia. Urantia is located in the Local Universe Nebadon.

All the worlds, including the ones of the Central Universe, are real, of matter, even though its composition differs from world to world. The spiritual beings do not inhabit in hazy, nebulous, vaporous and ethereal worlds but in material worlds.  They do not float in space without form nor substance even though they and their worlds are invisible to the worlds of lesser evolution than theirs. 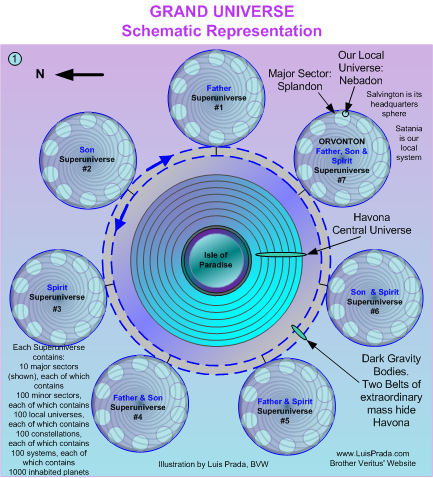 Urantia is part of Monmatia, the galactic name of our solar system.

After the soul finishes the cycle of reincarnations on planet Urantia, and Ascends to the fifth dimension, it has the election of staying on Urantia and serving in a higher spiritual capacity or leaving Urantia. If the person decides to stay will become an Ascended Master and part of the Spiritual Hierarchy of the planet serving to expand its mass consciousness. Eventually will leave Urantia leaving behind his position to be taken by a worthy replacement.

If the person decides to leave Urantia, the first place to go perhaps be a planet in Satania closer to Jerusem and dwell there for some time, possibly stay in other planets before going to any of the satellite planets of the First Heaven in Jerusem, the capital of the Local System Satania, to be trained in this postmortal residence. Then he moves to the next satellite planet and so on until he relocates to the main satellite world, the First Mansion World, or First Heaven. When he finishes the cultural preparation with this group, he then moves to the next group, the Second Mansion World or Second Heaven, and so on, until finally migrating to Jerusem.

After finishing the education in Satania, he is ready to move on to the next transitional headquarters.

As far as the astro-dynamic of Jerusem, the satellite planets revolve around the central planets of the clusters and they likewise rotate around Jerusem. 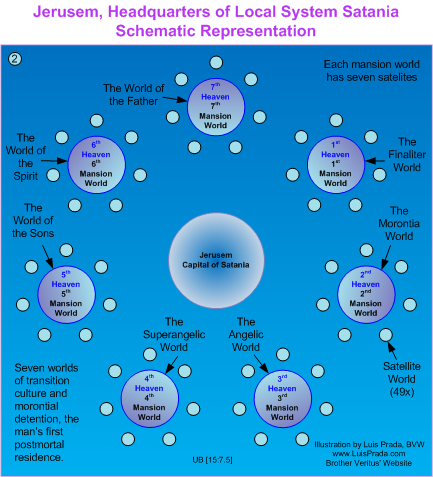 None of these planets has evolved through astrophysical phenomena but they were made perfect from the start and carefully positioned in space, locked in that position and spin on itself and rotated around following gravitational forces, and forming this gigantic and perfectly arranged clockwork. The same type of movement applies for all capitals described in this article, nothing is static.

Here in these clusters the sojourner goes through massive cultural and socializing training, cluster by cluster, similarly as was in Jerusem, until finally arriving to Edentia, the capital. When he finishes with his education here, he is ready for the next scholastic assignment. 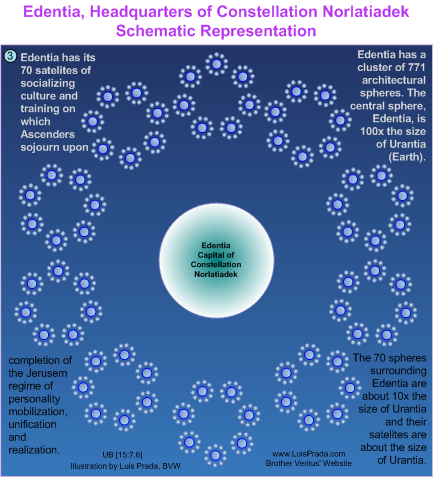 At this point in the journey the soul personality is ready to enter and take up residence in one of the planets near the headquarters of the Local Universe Nebadon. Nebadon is ruled by a Paradisiacal Creator Son, Christ Michael Aton of Nebadon. Christ Michael, or just Michael, is one of the sons of the Eternal Father of Havona. He has created this universe and is the father of all the Ascending souls of his universe. His consort is Nebadonia, a daughter of the Infinite Spirit of the Sacred Trinity of Havona. Divine Mother Nebadonia is the Maternal Creative Spirit of our Local Universe.  Christ Michael named his universe in honor of his dear wife.

After staying for some time in some planets near Salvington, the Ascending pilgrim enters the Salvington’s satellite clusters. Next to the previous socialization and cultural instruction the student starts his spiritual training in ten university clusters of 49 planets each. The training sequence follows the same pattern as explained before since that pattern is followed throughout the journey by migrating the student from planet to planet for each planet offers a different specialized knowledge to be acquired. 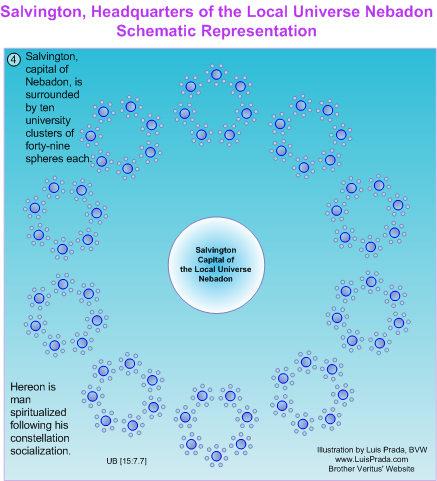 In Ensa the student learns higher physical laws. Ensa is the capital of the Minor Sector. 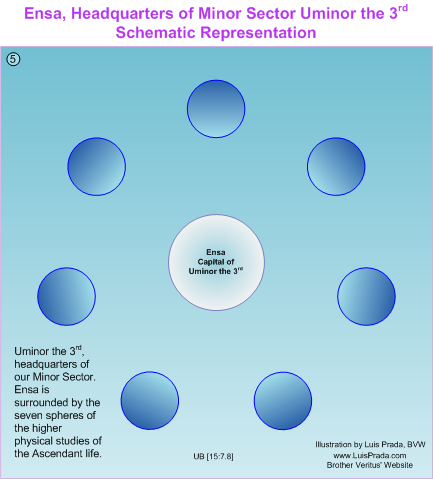 Here the instruction is for development of an advanced intellect. Splandon is the capital of the Major Sector. 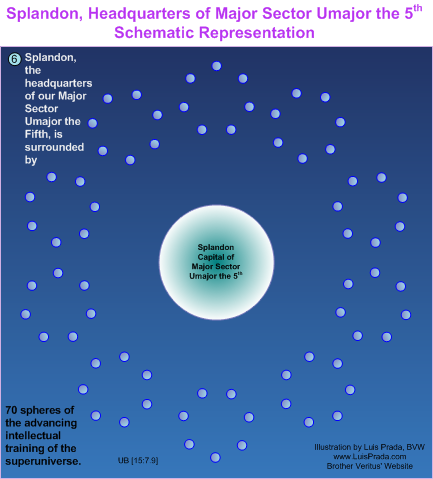 In Uversa the Ascending student must attend classes in 7 universities of advanced spiritual teaching, universe training and spirit culture. The satellite worlds are replete of universities and organizations for the teaching purpose. All the faculties of just one university take 70 satellite planets, and all the 7 universities take a total of 490 satellite planets, which are arranged in clusters revolving around Uversa, the headquarters of the administration of the Superuniverse Orvonton.

Uversa has the administration of one trillion inhabited or inhabitable worlds. Uversa is extremely beautiful.

Uversa is ruled by the Three Ancients of Days. 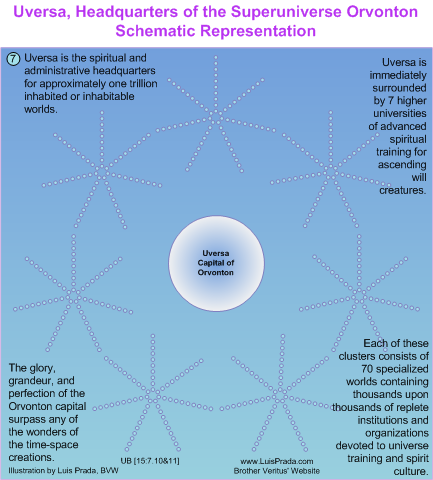 Havona is formed by seven circuits of one billion architectural worlds of great perfection which encircle and revolve around the central island, the Isle of Paradise. Between these rings of planets and the central island there are three concentric circuits with seven planets each, which correspond to the planets of the Eternal Father, Source or Papa God or Aton (7 planets), the Eternal Son (7 planets), and the Infinite Spirit (7 planets). These personalities are the three persons of the Most Holy or Sacred Trinity. In the graphic is given more information on these planets.

The Master Spirit adjudicated to the Superuniverse of Orvonton is Siraya, and his headquarters are in the seventh planet of the planets of the Infinite Spirit.

This is the final destination for the evolving soul in his eternal journey to Paradise. This advanced soul will reside in any of the architectural worlds and will go from world to world learning for a very long time. He may come back and descend to start another cycle as a Descending Soul or may —from the Central Universe as his seat of operations— dedicate to work in the uplifting of the evolving worlds of time and space such as Urantia. 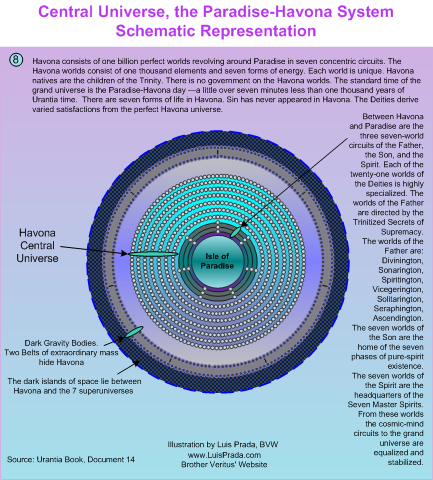 Summary of the Journey to Paradise

The graphic is self explanatory.  The only concept to add here —not shown in the image— is that the migrating soul does not go from headquarters to headquarters straight but as an adaptive acclimatization must spend some time on planets near the headquarters before entering the satellite clusters of the capital and finally the capital itself, which these comprise the headquarters of a system, constellation, universe, sectors and superuniverse. 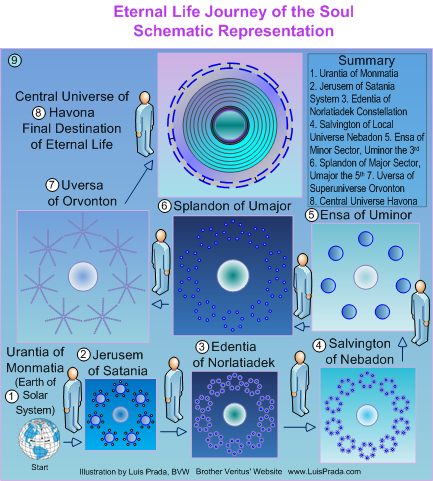