Light and Darkness Intertwined For Learning

Light and Darkness Intertwined For Learning

From The Planetary Activation Organization (pao@hawaii.rr.com).  Article taken from: http://www.paoweb.com/sn021004.htm.  Published by permission from PAO.

Selamat Jarin! We greet you, dear Hearts! We come before you at this time to inform you about what is now happening on your world and throughout this galaxy. At present, your world is approaching the moment when the reality that you currently know is to be thoroughly transformed. These changes, as you know, are occurring on many levels. In our last report, we very briefly touched on these changes. Heaven, under the sacred command of the Creator’s divine plan, has over the past few decades altered your various energy centers and even the nature of yourRNA/DNA. This is happening in conjunction witha secret, beneficial alteration of your world’s governmental, monetary, and financial systems. Your solar system as well is undergoing a great many positive changes, the most noticeable of which is the hyperactivity of your sun. These events brought you to our attention well over a decade ago as your secret rulers launched their vile scheme to take over control of your world. This we have told you many times before. Now let us look at how these events fit together.

For a fuller understanding of these developments, it is necessary to perceive the dark as more than being merely an opposite aspect of the Light. The dark is layered and has a purpose for its existence in physicality. Its heinous acts and vile pronouncements are all part of a drama that is used by the Light to teach us about the many strange and apparently illogical emotions that help to form and to precipitate physicality. Hence, all of you have a piece of the dark lodged within your physical structure. The essence of physicality is to learn about how Light and dark are intertwined. In this learning, wisdom can be gleaned which, when applied, can greatly accelerate your ascension and earn you a most wondrous enlightenment. The Ascended Masters of this realm know this, and employed this wisdom to reach their own enlightenment. At this time, your global society is likewise in need of this and is therefore going through an enormous cleansing. What we mean by this is that the dark is coming out into the open and manifesting the beginnings of its grand plan. However, in so doing, it is inadvertently and rather naively permitting the Light to learn of its ignominious intentions and to prepare plans of their own to counteract the schemes of the dark.

This need on the part of the dark to reveal its grand design to us began tens of millennia ago when your former overlords, the Anunnaki, first took an interest in the schemes put forth by the last Atlantean Empires. In moving to reduce the peoples of Earth to a state of limited consciousness, and hence into bondage, the die was cast for the various events that have led to your present situation. This most challenging predicament has, however, a positive denouement. The event that acted as the catalyst for this situation was the decision made nearly a decade ago by Anchara, the dark creator Being for this galaxy, to reverse its intention to wage total war and instead to cooperate with the Light. This temporarily endedgalactic war, and also placed the fate of Mother Earth into the hands of her inhabitants as well as the many Heavenly realms. Heaven responded by decreeing that a First Contact with the peoples of Earth was to be a top priority of the Galactic Federation. Earth’s Ascended Masters were thus to increase enormously their efforts to bring a new order of Light to your world.

Again, the important point to remember is to view what is happening on your world as part of a multi-layered process occurring simultaneously on all planes, the heavenly, the earthly, and the larger states of physicality. Each event on Earth is mirrored on other levels. The dark knows about these interactions and is quite aware that its present isolation greatly hinders any chance of success. Yet they persist with actions whose sole purpose is to see their grand plan successfully manifested. This escalation toward their goal by the dark permits Heaven also to increase the levels of her activities. As Light pours into our physical realm in ever increasing amounts, it accelerates the procedures decreed by the divine plan. A new Light order is promised for your world which ends the age-old dominion of the dark. It likewise provides the means to transform yourselves back into fully conscious Beings of Light. 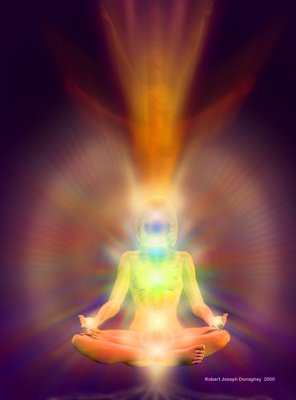 This struggle between the Light and the dark has gone on for billions of years. Its purpose is to teach us all how your emotional, mental, and physical bodies are ‘wired’ together. Only when you gain a full understanding of these interactions can you begin to integrate these various layers of physicality into your spiritual, or Soul, bodies. This is when you begin to become enlightened. We emphasize this because your purpose is not merely to go beyond emotions or even logic. Rather, it is to perceive the inherent limits of these faculties and to become well aware of their divine purpose. When physicality is completely comprehended, the truths and the falseness of this realm become clear. This wisdom can then be used to attain the borders of enlightenment and ascend toward full consciousness. In this state, all is made known and a reordering of your precious assumptions can then move forward.

Physicality is the great, holy vehicle used by the divine plan to assist you in coming to a fuller appreciation of the Creator. Your various life experiences are intended to help you understand how all things in Heaven, physicality, and Creation are connected and how they express themselves in an infinite variety of ways. Each lifetime, life form, or experience is wondrously connected to this greater whole. This greater whole is the divine plan, the divine thought of the Creator, which is moving us all toward a divine blending which, in turn, is able to forge one Creation after another. This means that we are all sacred expressions of the Creator and therefore need to look upon each experience, regardless of its outcome, as a blessing given in grace. Heaven constantly sings this grace and employs it to bless all who have been instructed to wander into the strange maze that is physicality.

As you view what is happening around you in this light, you begin to see how inevitable your victory really is. Furthermore, you can understand that this victory is drawing closer, and that it is not decades, or even years, away. These changes planned for you by Heaven are part of an operation to alter not only yourselves, but also the entirety of physicality. This divine pattern is returning you to the state of physical Angels. During this return journey, many apparently grim, almost catastrophic events were precipitated that need to be seen as part of the process that we outlined for you today. First Contact with benevolent Beings is in your very near future. Your collectively held concepts about this and other related matters can and will be profoundly affected, even shattered, by first contact. Remember that they are to be replaced by new, and more relevant, beliefs.

The process of change is one that is little understood by your global society. Your many academic disciplines devoted to this subject have only scratched the surface of this topic. Change is more than a mere evolutionary procedure. Rather, it resembles a life form in the way it reacts, grows, and matures. All that you produce in a given society has this capability to evolve a unique form of consciousness which can then teach you more about yourself and the reality in which you reside. In each moment, this process undergoes a minute degree of altering further influenced by the occurrences of the recent past, the present, and the ‘potential’ future. Everything is part of a complex operation called change. To truly understand change, it is necessary to take in the aspects of both the micro and the macrocosm simultaneously. Together, We are Victorious!

Today, we have given you a new way to look at what is happening on your world. The key is to reserve judgment and to perceive how all things are related. Remember that each part of a living, conscious universe is connected by grace and the decrees of the divine plan. We now take our leave. Blessings, dear Ones! Remember in your Heart of Hearts that the perpetual Supply and infinite Abundance of Heaven is indeed Yours! So Be It! Selamat Gajun! Selamat Kasijaram! (Sirian for Be One! Be Blessed in Love and in Joy!)