THE PHOTONIC BELT AND EARTH

The Spanish website from which this information was taken is no longer in the Internet.

Due to the fact that Earth will enter the PHOTONIC BELT astrologists,scientists and historians believe and think that the next millennium will mark the beginning of a new stage for humanity.  For Earth astrologists this new stage is the Aquarian Age, an epoch of vast changes in its science and technology and its consciousness.  For the scientists and historians is an epoch of great difficulties, that its social and political structures could not be able to manage; in any case, it seems to be the prelude of a marvel or the moment of the extinction of Humanity (this moment is over, since the 144,000 necessary for the extinction not to take place were already obtained – clarification by Mónica Barbagallo).

The question remains standing: What role will the nearby PHOTONIC BELT play at these times?  The Belt can be divided in three sections:  First we enter in what is denominated the Null Zone that lasts approximately 5 or 6 days, including 72hours, approximately, of total darkness (3 days of darkness); then, we pass to the main part of the BELT itself and it will be experienced a light of permanent day (24 hours a day).  This trip will last around 2,000 years (Dramatic Prophesies of the Great Pyramid) and ends when the Solar System goes out from the other side of the Belt, crossing the Null zone for another 5- or 6-day period.

THE HOUR FOR THE GALACTIC PARTICIPATION WILL ARRIVE:

The arrival of the Photonic Belt is causing a great expectation and a great «stress» in all the Solar System. For the crucial moment there will be three sources of help:  1.- From the great spiritual helpers and angels of the many dimensions.  2.- Those in human form that help the celestial forces.  3.- It has been established energetic protective patterns around the planet. All this set minimizes the seismic activity.

But there is another point that is also important to understand: You are at the brim of great changes and of new beginnings due to our future landings of «initial Contact» in your planet.  This Spiritual Hierarchy and its First Contact, led by the Sirian, will help all the solar system to take its place in the Galactic Federation so it converts in what we have finished describing, a galactic civilization.  Through love and wisdom applied here on Earth, you can be assured that at any moment in the future you will be able to share your knowledge with other stellar systems, and then the sharing will continue before the presence and the ever-growing power of God.  Really, you are at the brink of an astonishing and marvelous time.

Next are some comments from Luis Prada:

The illustrations that follow in this section have been taken from the book: «The Pleiadian Agenda, A NewCosmology for the Age of Light», byBarbaraHand Clow (Bear & Co.Publishing, 1996).

The Photonic Belt, known also as «Bond» Radiations, «Photon Belt», «Photonic Belt» or «Photonic Band»,is part of a group of energies of seventh dimension (seeFigure 3) that stream in the shape of energetic belts or «doughnuts» from the center of the galaxy or Great Central Sun in all directions.   One of these energetic bands flows from the Constellation of Leo to the Constellation of Aquarius and breaks the Platonic year in two galactic nights and two galactic days.  The galactic days happen, then, in the Zodiacal signs of Leo and Aquarius as seen from the perspective of our solar system, see Figure 1.

Angels can use this energy of 7 dimension, during sleep, to activate the chakras of the disciples of the Light that are prepared and thus ask for it.  These energies produce changes at subatomic level in all manifested kingdoms.  The solar system won’t be the same, the change affects many dimensions.  Likewise, the galaxy is being bombarded by cosmic energies that affect it in the same way and all known creation in the 3rd dimension in this universe will pass to the 4th dimension and then to the 5th.  The resistive packets that do not want change will implode to other stellar system or other creation appropriate to their evolution of 3rd dimension where they will continue recreating their conflicts, polarities, fears, and wars until they eliminate from their auras this negative programming.

Observe also in this illustration the Platonic year with the Zodiac and the Precession of the Equinoxes.  The sun entered the photonic zone in 1,998 and will stay in this area for approximately two thousand years.

Figure 14 shows the five Mayan cycles of time through where the solar system passed.

THE REALM OF GOLDEN LIGHT

The Photon Belt… the final step

[Editor’s Note: Some of the fatidic prophecies described at the end of this section may not happen due to extraterrestrial technology that can intervene and produce environmental and planetary control to avoid catastrophes.]

The Pleiades, the Constellation of the Pleiades, is composed of various solar systems.  The Central Sun of the Constellation of the Pleiades is called Alcyon and its systems are, from inside out: Merope, Atlas, Maya, Electra, Coele, Taygeta, and ours, called Ors,which are always within the ring of photons being thus inhabited by beings of eternal light (as the luminous angels in antiquity).  Our system is the farthest and the last orbit in rotating around Alcyon and it takes 25920 years to complete a full turn.

According to Mayan prophesies and studies (of which we will speak later in our space Other Subjects («Otros Temas») ) on December 22 of the year 2012 we will definitely enter into the Photonic Radiation Field.  During the next 10 years the Planet Earth and its neighbors of the solar system will adjust their molecular structures.  All get ready for the great change, a unique opportunity for the inhabitants of these worlds.

Upon entrance of the Solar System and our Planet into this radiation all molecules and atoms of all existing bodies will be excited.  This molecular excitation will create a type of constant non-warm light; a light without temperature that does not produce shadows.

The ingress to this field will be gradual which will take approximately two days. Then the zone of total darkness of three days, here the electric apparatuses will not function as a result of the prevailing hipermagnetism.  The main part, the unending light, will be 24 hours a day during 2160 years. Upon entrance of our sun into the «Photon Belt» a darkness as the night with a rain of stars will be produced on Earth that will last for 5 days approximately.  This will be a consequence of the sudden modification of the solar radiation and of the molecular excitation of the atmosphere upon entering in contact with the messianic ring.  The perpetual day will be a consequence of the proper radiation not depending anymore on the Sun to have daylight. If the Earth ingresses before the sun, a phenomenon similar to a planetary fire will be produced, the matter will look luminous, but it will only be a visual phenomenon.  It is in this Golden Age, or Realm of Golden Light in where human being will be able to be fully realized, the peoples will be able to understand their history, their psychic and full consciousness abilities altogether with their solar system and the universe.  This realm of light will be known for all whose spiritual and bodily inner vibrations be related to the messianic waves of the photon belt.

By just the fact of entering this photonic field the Earth will be reducing its rotation due to the reduction of the solar radiation, the temperature will descend and the ice fields will extend up to the 40º of latitude in both hemispheres, only will be inhabitable the zones near the Equator even tough this equatorial zone won’t be as it is today since the change of the polar axis will create a glacier that will extend throughout all continents.  The ice layers will not resist much due to the lack of rain and soon will melt as a result of the constant radiation.  Then the Earth will be flooded, the levels of water will rise up to the 900 meters of height covering the face of the planet.  The imminent cataclysm will mark the beginning of a new cycle, a cycle of light, of peace, of justice, without diseases, nor wickedness.  A kingdom for the just, for those elected among thousands, for the ones who vibrate at unison with the tune of the Cosmos. 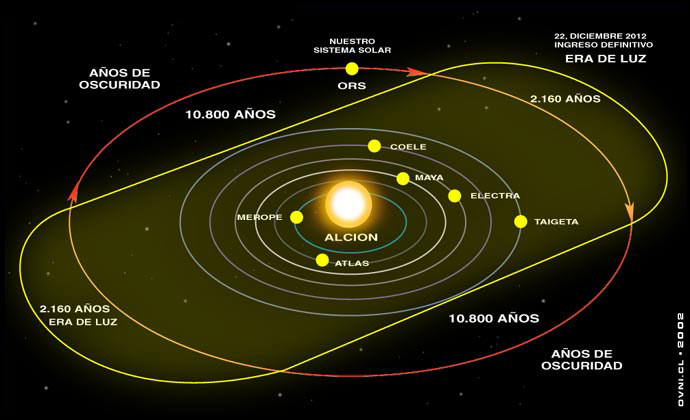 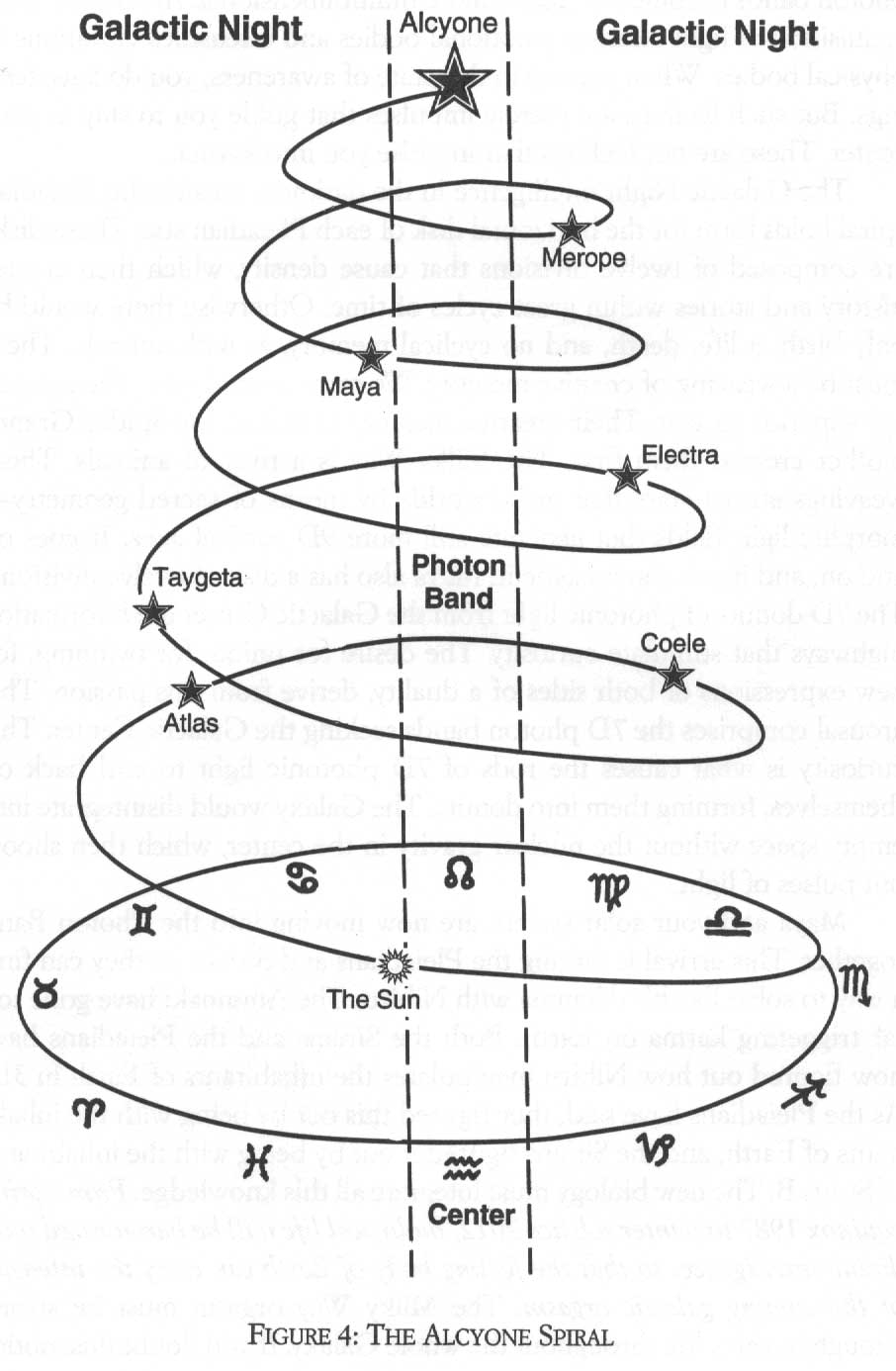