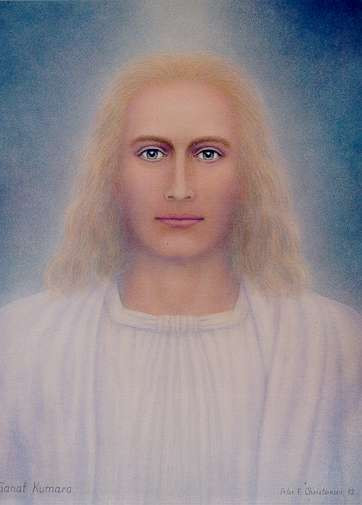 Many will be drawn to this place. Some will come to share and others to receive. Some will come strong in their truth and othersunsure, wondering why they are here, questioning what it is all about. May we create a place for spiritual growth and understanding. Let there be something unique here to inspire and comfort each soul and So It Is.

Beloved beings. I bring you warmest greetings from the Great Central Sun.

This is Sanat Kumara and today I would like to bring you someadditional information about your experiencing upon the earth plane. Eons ago when queried if you would like to play a game, allyou, eager souls, without batting one of your lovely celestial  eyelashes, immediately said "Oh, yes!"  And almost as immediately you embarked for Earth.

Now it has been eons and eons and eons that you have been here,playing what we call "The Game." You came for the experience, ofcourse, of Earth -- all the many, many delights of earth living,  including the problems, the learning to survive without knowing  who you are and doing it anyway, plunging yourselves deeply intothe experiencing. Of course, every time you incarnated, you became more and more enthralled with the game and subsequently more and more entrapped by the game. When in your collective perception you felt that there was no way out, we heard a great wailing emanating from the souls, a crying out for freedom from theearthly wheel of death and rebirth. And your cries initiated many,many celestial conferences and deep discussions with Creator aboutyour plight. From this was devised an utterly new plan, one that has never been offered before, a new way of ascending the planet which was been set in motion with the Harmonic Convergence and isnow giving widespread opportunity for you, incarnate souls, to experience the ascension.

Long, long ago came the Higher Selves, creating the body consciousness and the soul. They took on a physical form to grow,to learn, to play, to experience. And those souls who came to Earth to move along the path of initiation toward their own mastery of the physical plane would eventually complete that, and then they would leave because that was how it was done.  They came, they learned, they grew, they experienced, they moved through the initiations and then they ascended and left, completing their experiencing of the physical plane.

Over the eons, civilizations would rise to glory and then fall tothe depths, or even disappear all together. Periodically Mother Earth would initiate her own purging cycle with cataclysmic changesin her body that would be similar to erasing the blackboard, wipingthe slate clean and starting over. And then she would rest from herlabors awhile. Then the next wave of beings would come along and they would experience another epoch with different tasks of learningand eventually things would deteriorate, civilizations would die off, cataclysmic destruction would be ushered in and once more Mother Earth would then rest from her labors.

And so has this process been through the ages, in differentkinds of time, you might say, in different dimensions with different ways of experiencing time and space and density. Duringyour sojourn here you have experimented with much and have taken all your experiencing into the core of your beingness.

Which brings me to the Divine Plan. Rather than letting MotherEarth go through this routine again, it was decided at the highest levels that the opportunity would be given to attempt ascension of the planet with all her beings aboard. Otherwise, it would be the usual way of ending the cycle with wars and massive chaos andthe cataclysmic destruction brought by earthquakes and volcanoes and perhaps even asteroids striking the earth. And we would see what wonders Spirit could work upon the earth plane.

We in the higher dimensions would see if there were enough beingsincarnate upon the earth plane who could raise themselves up and then indeed influence the entire planet into a higher way of life,a higher level of being, however small the numbers were to start with. Thus the call for volunteers went out through the universes.You answered this call and so here you are, living out your dreamof fulfilling the opportunity given to accomplish the physical ascension. It is a beautiful gifting you brought with you into this incarnation.

So in these times, a different path is being attempted in ascending the planet. This time, instead of completing the initiations and choosing to leave the planet, the choice of the moment when passing the sixth initiation is choosing to stay here to help others with their ascensions. You are their teachers.

You are here to teach them how to detach from the game you haveall been playing for lo these many eons. That is your primary mission. And you thought it was something else, didn't you? And,of course, there are many ways you have chosen to express your offerings. These are your gifts and your talents that you have brought with you. Many different ways. You know what they are.

You are engaged in doing them. Teaching and healing the others,preparing them for the ascension.

As the wake-up of the masses accelerates, you will find yourselves more and more in demand, dear ones. There are so many,many incarnate beings who need to be healed from the accumulationof the wounds acquired from their long engagement in the arena of the game. They are counting on your contracts and agreements to help them.

At other levels of your being, you have chosen the tools whichyou shall use to help to awaken others, first of all, to the realization that this is a game they are playing and secondly, howto detach from the game for it has been decided the game is over but most of humanity is still continuing to play the game. They do not know it is over! They have not heard the final whistle blow. All they hear are the drumbeats of the game, the cheers ofthe crowds, the competition and the voices of the crowds urging them ever onward into the playing of the game.

You who are waking up are realizing the game is over. The moreinto the center of your beingness you go, the more you shall be able to detach from the game. This is how it used to be, as it was done in the great temples of Atlantis and Egypt and Lemuria.You see, when you finally realize who you are, the game is over.It is as simple as that, dear ones. Then it is up to you to decideif you want play the game anymore but the fun is gone. When you know who you are, the fun is gone from the game. Then you tend to get restless and bored. In the past, many then simply left and returned to their home worlds or moved on to other experiencing.

Now in these times the great challenge you have set beforeyourselves is to wake up to the knowledge of your true selves and stay on the planet in your physical bodies anyway even though youmay be weary, restless and bored. I would remind you that these are also your agreements that you are fulfilling, the ones you made before incarnating, before you gleefully jumped into these «body suits" you are wearing.

And so you are here to carry out your mission to teach othershow to detach from the game, how to enter the center of their beingness to discover who they are. And of course, as you succeed in your endeavors, more and more shall detach from the game. They shall become awakened beings. Now at that point, manywill choose to exit the physical life. However, many, many will also choose to stay and help with the ascension delaying their own experiencing of the glorious ascension ceremony. Many also will choose to leave because they are unable to detach from the game but at the same time have grown weary of participating in it. They havemade different agreements. These beings will be given the opportunity to continue the game at another location but not on Planet Earth.

This planet has a different destiny and you, Lightworkers, arecreating this marvelous future for Mother Earth and for yourselves.You are becoming aware of who you are and experiencing this while you are still in density. It is an awesome experiment you have beenundertaking. We are happy to report that you are making steady progress in anchoring the Light, creating the Lightworker groups around the planet which shall sustain the new Earth in these transition times and the life forms upon it, those who decide tostay, those who are willing to raise their vibrations at least high enough to keep pace with Mother Earth. This includes the plant and animal kingdoms, as well for many species have chosen toleave and will not be present on the new Earth. Release them withyour love and thanks. Further, those humans who are able to raise their vibrations ever higher will experience many wonders while still on the physical plane.

So, dear ones, you are here as teachers and healers. That isthe role you chose prior to incarnating, expressing your gifts, your talents, your modus operandi, shall we say, in helping others to detach from the game. Yes, you are going through yourown Spiritual wake-up so that you can increase your experiencing and understanding of the wake-up process. Most of humanity have so forgotten who they are they have moved into fear over the eventsnow taking place on your planet. They cannot see anything beyond the game, so engrossed in it have they become. There are also many, many of them who simply enjoy playing the game. However, when you have awakened them enough, they may become bored and, at this point,they shall either become teachers and healers themselves or out oftheir boredom they'll depart the planet for the higher realms.

There are many others who shall work on their magic skills, whoshall become magicians, who shall in their knowing see what they can create, what they can manifest for themselves. And, of course,some things will turn out well and some things will turn out notas was expected. It's all part of the learning process. You are becoming creator gods in your own right and you must learn the consequences of what you are creating. You must learn the processof creation. You cannot move freely about the universe until you’ve learned how to manifest, until you've learned all that is necessary about creation.

So, dearest ones, you do have the power to change the planet. Youare here now because this is the service you have chosen. This is your time to be upon the earth plane in the physical body. You have come here with specific purpose and you shall carry out yourpurpose, that of raising the planet to the higher vibrations and raising yourself as well to the higher vibrations and concluding your participation in "The Game."

And we shall all cheer mightily in your marvelous victory. Thereshall be a great celebration with much feasting and merriment.  Stay the course, beloveds, stays the course. You are more preciousthan you know.

Accept now the unending Love and the wondrous blessings flowingto you from the Heart of the Great Central Sun. This is Sanat Kumara.