William Lloyd Garrison, a white man,  worked tirelessly for the emancipation of black slaves.  Garrison spoke passionately and eloquently, using a classic language and direct style in speeches and writings.  His fearless conviction and resolution and his opposition to tradition and societal bias should be set as an example for Light Workers who are working now for the emancipation of humanity from the Oppressive Dark Forces that control the planet.  His vow, given below, should be yours but with a different light and focus: The fight to manifest the Light of the New Age.  So Mote It Be!

According to Brother Phillip (George Hunt Williamson) in his book "Sacred Places of the Lion", William Lloyd Garrison is a reincarnation of Akhnaton, the Pharaoh of the XVIII Dynasty in Egypt who worked for the people’s emancipation from the bondage of Amunism.  He was also a benevolent King who allowed a Lesser Exodus from Egypt of the Hebrew people.

"Born in December 12, 1805, in Newburyport, Massachusetts, Garrison, from a white family of moderate means, became an apprentice to the editor of a newspaper when he was only thirteen. Soon after his apprenticeship ended, he and a young printer named Isaac Knapp bought their own newspaper, the Free Press. One of their regular contributors was John Greenleaf Whittier, later to become known as the poet laureate of abolition. Garrison’s dedication to the abolition of slavery was already apparent; on the fiftieth anniversary of the country, Garrison said, "There is one theme which should be dwelt upon, till our whole country is free from the curse —SLAVERY." The paper lasted only six months; when it folded, Garrison went to Boston, where he worked as a printer and editor until he was offered a position in Baltimore, as co-editor with Benjamin Lundy of the Genius of Universal Emancipation.

"While in Baltimore, he was sued for libel by the owner of a ship that transported slaves. Garrison had called him a highway robber and a murderer. He was convicted and sentenced to six months in jail; he served only seven weeks, when money was donated to pay his fine.

"On January 1, 1831, Garrison, back in Boston, published the first issue of The Liberator, the conclusion of his editorial left no doubt as to his intentions:

"I am aware that many object to the severity of my language, but is there not cause for severity? I will be harsh as truth, and as uncompromising as justice. On this subject, I do not wish to think, or speak, or write, with moderation. No! No! Tell a man whose house is on fire to sound a moderate alarm… but urge me not to use moderation in a cause like the present…

William Lloyd Garrison passed to transition on May 24, 1879. 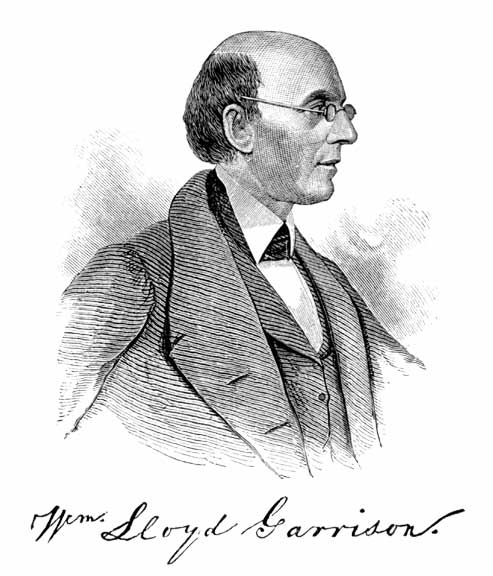 William Lloyd Garrison, from the publication «The Liberator: ‘To the Public’ ", January 1, 1831:

Oppression! I have seen thee, face to face,
And met thy cruel eye and cloudy brow;
But thy soul-withering glance I fear not now —
For dread to prouder feelings doth give place
Of deep abhorrence! Scorning the disgrace
Of slavish knees that at thy footstool bow.
I also kneel —but with far other vow
Do hail thee and thy horde of hirelings base: —
I swear, while life-blood warms my throbbing veins,
Still to oppose and thwart, with heart and hand,
Thy brutalising sway —till Afric’s chains
Are burst, and Freedom rules the rescued land,
Trampling Oppression and his iron rod:
Such is the vow I take —SO HELP ME GOD!

And thus is my vow too: To oppose the brutal control of the Illuminati Bankers’ claws over the oppressed peoples and to make Liberty, Abundance and Love flourish in the rescued New Earth.  Such is the vow I take  — SO HELP ME GOD!  —Luis Prada

Other website with information of William Lloyd Garrison:
http://www.pbs.org/wgbh/aia/part4/4p1561.html