We Are the Arch Angels of the Resurrection

We Are the Arch Angels of the Resurrection 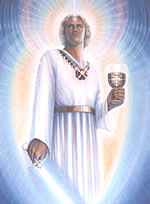 Archangel Michael channeled throughCandace Frieze. Published in this website on May 1st, 2009. Taken from: http://abundanthope.net/pages/article_3007.shtml

Dearly Beloveds, I AM Arch Angel Michael come to spend a few minutes with you today and explain what an Arch Angel is as there is confusion greatly on this topic.

We, beloveds, are the creations of The Father and Mother Creators of the local universes. My parents are Christ Michael and Nebadonia, as she has been introduced to you.

On earth at this time is a great gathering of the Arch Angels, in fact, a large unit here since before Michael bestowed himself upon your world. My name is not Michael. In fact it is a title. My name is complex as are all of our names, but I am called the Arch Angel OF Michael.  I head the contingency of Arch Angels on your world. I am that big boss of them, but then I look to Christ Michael as not only my Father but also my boss.

There is only ever One Arch Angel OF Michael on but one lowly world in a universe, because we serve when the Creator Son himself bestows himself upon a world. And this occurs only once in a universe, and you, dear ones, are so very blessed to have a double bestowal in the return of Michael in this manner, for he has done what no other has done before him, walk the bestowal world twice. And in this understand we mean all bestowal worlds since time immortal. Not a single Avonal bestowal has returned incarnate to a planet. NEVER.

This is a learning situation for all who come here at this time because this has never been done before. We tread new waters, all of us, and we, my contingent will be serving this planet as part of the Correcting Time for all the time that is required. We have no idea ourselves what will be the final outcome, but we expect to see those in service on the planet, via incarnation, to accomplish also great miracles. And you have already, in that this will lead to the Ascension into Light and Life and will have a most gracious additional opportunity to assist in the making of cosmic history.

We are here at this time as the Arch Angels of the Resurrection. All planets are judged in stages of their development, and in that sense this is no different. Incarnated older souls will make their way wherever they should, and those «new souls» created on a world like this, will make their way to the mansion worlds. They are the ones resurrected to eternal life. You, older ones, are already of that status.

We are the ones that make that possible, this resurrection of new souls, in concert with the destiny guardians. This is a tough world, and we would wish more would be starting their true eternal journey.  The number is not so great, but at the same time is greater than we expected when the counts were done. Fully one billion young souls give or take a few will be making their way to the mansion worlds. And many are so tough now, they will walk considerably past the first seven mansion worlds.

There have been 10 Billion older souls, the ones labeled the galactic thugs and fallen angels placed on this world over time and we are in wondrous awe, as fully 50% of these ones will be released from prison and make their way either back to their former realms, or make their way to higher planets of experience. While we would have loved more, this is still awesome.  Things finally got tough enough on them, they chose to return to the Light and another trip to an awful planet was not their desire.

Now these ones did not always make the progress we would have liked, but it was agreed to allow them out of this prison world if they fixed 51% of their karma. Many will not really be going to higher worlds yet, but there will be opportunity in various societies at earth’s level or a bit above to try their wings and gain trust.

Normally much more karma must be satisfied on the prison worlds, but Michael doesn’t like the process of uncreation and great amnesty and mercy was arranged. We wish them well. They will be spread widely about so as to not have too much concentration in case of relapse. Many of these are not incarnate now, as they are waiting on the other side for their release and in schooling still.

This resurrection carried forth by the Arch Angels of the Resurrection has been occurring already for those finished with incarnation. Those still incarnate will experience the roll call during the stasis.

Now a thing or two about me personally. «Young» arch angels do incarnate at times to gain the human perspective necessary to understand their roles, but the Arch Angel of Michael is NEVER incarnate, dear ones. I am long past that. Very long past that.

Neither are Arch Angels EVER comets, beloved. There is some material NOT by myself circulating claiming me to have been Hale Bopp comet some years ago and now Comet Lulin.  A comet is never a being. It is a ball of ice and other matter that circulates solar systems, drawn by the same forces that propel moons and planets.  No way could a being of any sort, be a comet. Suns and planets are beings, eventually at any rate, as their consciousness grows, but a comet never grows a consciousness, let alone that of an Arch Angel. An Arch Angel cannot become a ball of ice and matter.

There are also some claiming to be fragments of me. We do not fragment either. But we do occasionally select ones to serve us in a personal way. We can also donate a bit of our DNA, as we do have DNA, to a fetus, which provides a linkage directly to us, and this person would be more like a son of one of us and not a fragment of one of us.  You have so much to learn yet, beloveds, so much to learn.

All of you who are going to stay on this planet, you who are ensouled and made that choice have been having your DNA personally upgraded by the Arch Angels of the Resurrection, dear ones. And so have some going elsewhere in physical form so that they can make the journey. While I do not engage in that activity in the labs aboard ship, others do, and the work is done actually by the Life Carriers and their students and associates.

Nobody is having their DNA affected in any other way but this, and the «angelics» by whatever form are involved. The little greys are not angels and they were NOT given the job of upgrading the DNA on this planet. This is properly taken care of by those of high station. There are also some highly advanced geneticists such as Mother Shekhmet working with the uplifting of the DNA on this planet. She is concerned with reestablishing the stepping stones in the animal and plant life on this world.  But the human upgrading is done by God’s scientists, dear ones, and not by the average Joe on this world at this time. This is a different project than that of Adam and Eve. This is done in a laboratory, and not by sexual breeding.

The DNA failed on this planet. The various teams have been reworking it greatly. It was contaminated long ago, and it was left this way, and then a few marauders messed with it too. These ones are of course gone now from not only this world, but this entire Universe of Nebadon. That’s why it’s the final battle between Good and Evil; the prisoners have been handled for the most part now. There are no marauders in Nebadon at all now.  Those still developing «flight skills» are kept very close to «home» and not allowed to infest the rest of the creation.  That was an Orvonton decision, as this darkness can’t continue, it got out of hand for reasons you have already been informed.

This is enough for the time being.  There will be more contact if time permits through Candace. She was a joy to work with for this short piece. Feel Blessed always for you are! I AM THAT I AM, Arch Angel Michael, Chief Arch Angel of the Resurrection.

Those of you interested might wish to get out your Urantia Books, or go to www.urantia.org, and make a search of Arch Angeles. I do not wish to do this tonight. It may be spelled as one word in some sources, archangel, but Michael prefers it spelled as two words, so I have done so.

I did one other piece with him a couple of years ago, which was not posted to the front site but to AHS. I have had quite a few personal discussions with him and I do not type up my personal discussions, any more than any one would.  I say this because I have been challenged on this, as some believe the higher being somehow moves the fingers of the channel. There are some channels who are equipped this way for various reasons.

These channels are often no telepathic and, believe it or not, not all «angels» are telepathic with humans directly, so that is why they use the beings as «sleeping prophets» and the like. In the past, while this planet was still quarantined, this was the method of choice, as in the case of Edgar Casey for example. People were not ready to accept telepathy either, and so the «sleeping prophet» was more accepted.

Telepathy is MIND to MIND communication. It’s really quite similar to talking on a phone or having a personal conversation, except there is NO sound, not even a» little whisper.»  These words I perceive are obviously NOT my own thoughts. However, the Thought Adjuster, when it makes contact, usually this does feel as your own thoughts, and often expressed in those «light bulb» type moments when something becomes clear.

Seeking Visionaries who can and will create the many messianic missions needed to heal Earth and her peoples, and bring balance. Seeking those who can constantly expand their truth, and will strive earnestly to stand in that truth 100% of the time, making every moment of everyday, a Holy Event. TWO OR MORE IN MY NAME. ~www.abundanthope.net