Physical Attributions of the Ten Sephira

As Applied to Man

Kabalistic compilation and tree of life graphic by the author.  Here we talk of man in philosophical terms, what is discussed here applies to both, man (Adam Kadmon, a goddoss) and woman (Eve Kadmon, a goddess).

By a relationship with an wrong Kabalistic teacher or a Kabalistic dabbler in the past you might have been led to believe Kabbalah is an abstruse esoteric subject, too confusing to deal with.  In reality it is a simple subject.  It is a systematic representation and cataloguing of energies that manifest through life and their relationship to astrological influences.  This organization is consistent with and according to energy attributes.  From here the Tree of Life and its ten sephira was created (sephira or sephirah is the plural for sephiroth, or the individual energy, represented by a sphere.)

As with any teaching, you have to devote time and energy to interpret and understand it, but once you do, it turns out to be quite simple.  Here I present to you in graphical form the physical attributions of the sephira in the Tree of Life.  As you live your normal life unknowingly you are constantly using these attributes.  At any given time you are using several energies of Nature, or sephira.  These energies are connected with the chakras, physical body organs and color rays, also with sacred vowel sounds and with an associated Chohan or Ascended Master which is assigned to a ray and chakra.  More information is available for the graphic but space constraints.

If each attribute of a sephiroth is expressed in Truth and in pristine clearness as when the chakras are functioning without blockages, at full potential and the four lower bodies are balanced and purified, then man becomes the manifestation of Adam Kadmon, a co-creator with God, the expression of the Master Within or I AM Presence.  Remember that Master Jesus Sananda, the Christ, expressed this condition when he asked the question: "Isn’t not written in your law, I said, Ye are gods?"

Adam Kadmon is not the old man, the Homo Sapiens, but to the new man, whom Osho calls the Homo Novus.  The old man did not really lived, but slumbered in an illusion, a holographic matrix, his self-fabricated prison.  He lingered in dramas of his own making and blamed others for his self-precipitated misfortune.  As the common man lives his illusion he is manipulated by many forces outside him: psychic forces, family and friends, government, the media, secret government, corporations, economics, you name it.  Peoples thus manipulated can be called Children of the Matrix as is the title of one of David Icke‘s books*.  In Tarot they are represented in Key 15, the Devil, as a naked couple tied by loose chains to a half cube which is a symbol of half knowledge because this man perceives only the sensory part of reality as All That Is.  The symbol of true man is the Pentagram, but in this Key the Devil Baphomet displays on his forehead an inverted pentagram as a symbol of reversal of true understanding of the position of man in the Cosmic scheme.  Baphomet represents the Dark Forces manifested through the above-enumerated external forces.

With the death of the old man the new man is born, as rising from his ashes as the Phoenix —actually his ashes transform into new cells, full of vitality and Light.

By being balanced between the two pillars Adam Kadmon is centered in the air element, the central pillar.  He breathes Nous and so he is nourished.  He dwells in the borderline state between two realities, the now and the potential future, the physical and the spiritual.  He needs not any longer hoarding food nor knowledge nor anything else, because he is provided for as and when needed.  Indeed he is a King in his own right, so he is crowned not by human hands but by his own merit.  Hail to Homo Novus!

Adam Kadmon is universal, Homo Universalis, because he transcends all barriers of sex, religion, color and lands.  His country is the planet Earth and his real Home is in the stars. 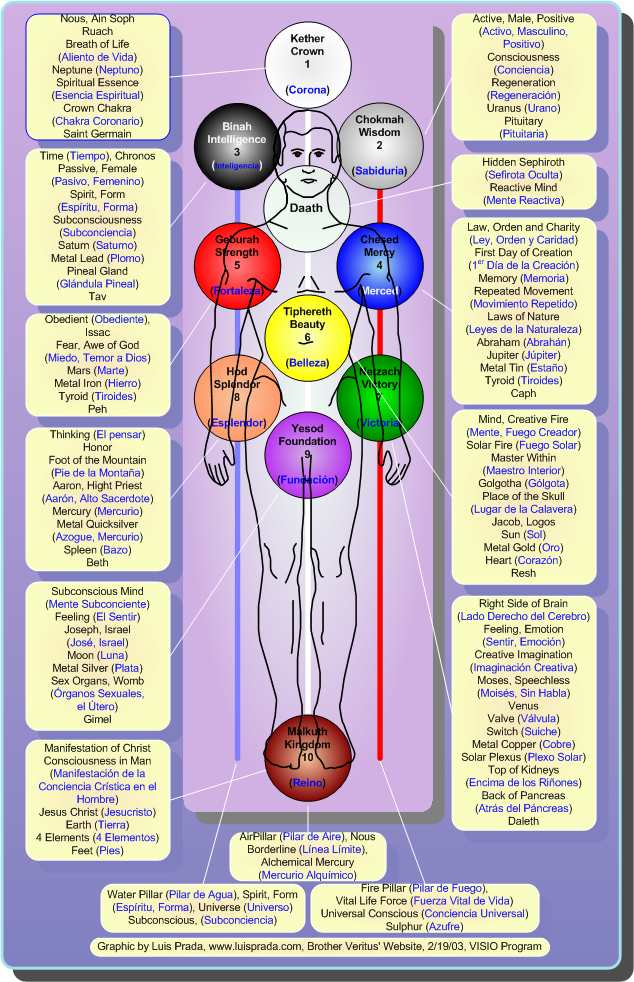 Note:  Correction.  The water pillar and its sephira are associated with the left side of the human body and the fire pillar and associated sephira with the right side of body.  A correct representation would be to invert the position of the columns or place the man looking backwards.  Since the traditional representation of the Tree of Life is as shown and does not look aesthetically pleasing to show man turning his back on the viewer, then the graphic is as shown, so please make the correction in your mind.