The Creator’s mark, the seal, has been placed upon the [third] eye of many Lightworkers.  They have earned this Blessing and are thus so "tapped on the shoulder" by the Creator.  They have proven themselves through countless trials and tests to be unshakable in their belief, their commitment, and have reached a certain level of consciousness and spiritual development.   The Creator selected  the receivers of the seal some time ago from the purity of their hearts, the level of strength, determination, and humble service to the mission they accepted so long ago, and the sincerity of their commitment while here now.

Those without the seal have, in effect, missed the "first cut" and will suffer much in the coming times.  Many warnings have been given that the time was short and the time was now.  Many continued to ignore the warnings,thinking they had forever to make up their mind, to step up to the plate, to truly make their commitment,  get off the fence, or to accept their mission, not live in fear, and stand in unshakeable Knowing.

The course is set and in full motion according to each one’s previous work and that which imbues each individual heart.  The scripts are written and rewritten again and again, and those who will be making this first journey already know their lines and are ready for this next act to begin.  Those who remain will find the path even more difficult than it was before.  The choice was and is always yours.  Those who have been "sealed" yet chose to remain still will reap even greater rewards for their selfless service to others.

For those who are ready, Archangel Michael and his angels of the GoldenLight placed the seals during each individual’s time of sleep.  Though theones who received the seals were asleep, they were consciously aware of theplacing of the seal and sometimes confused, as most did not know what washappening.

Most instantly awoke with the coming of the Angel of the Seal and the fixing of the seal upon the third eye.  The angel was gone by the timethe startled receiver was able to sit upright out of his/her previoussleep… the full image of the one bending over them, the pressure andfeeling of the seal being rapidly placed over the third eye… all ananosecond event of both awareness and confusion.  It happened so fast andwas so powerful it seemed invasive although it was not and many were notsure what the nature of the work was.  If this event resonates with you andyou have  been concerned since this literal awakening as your third eye hadsomething sealed on it, do not worry.  What was placed there and turnedrapidly four times to secure it was the Creator’s stamp upon you.  You canstill feel the presence of it in your third eye area. Rest assure that iswas Archangel Michael’s angels which did the work on you…  those of theGolden Light.  This was a higher initiation.  Blessings!

Those who were bestowed the seal Know who they are now.  As the biblical saying goes, "do not throw your pearls to swine"… which simply means thisseal is a treasure given by the Creator and it’s presence is to be kept toyourself, not to be shared with those who do not carry it or can not see itfor themselves.  Do not share this personal experience.  The Knowledge ofhaving received it is meant only for those who have received it and forthose who can see it…  those with their third eye open.  Those who werebestowed the seal will be known only unto themselves and the Creator untilthey are brought together by divine order at the appropriate time.  Theappointed time of this coming together has already been chosen by theCreator.  All will be revealed at that time in the near future.

Truth starts to exert itself as the lies and deceptions of those of darkintent become exposed more and more daily.  Pray for the Truth to berevealed for the Highest Good of All and it shall be so.  Pray for the typeof leadership and life you deserve —one of Truth and quality, for thebenefit and the well being of all.  Acknowledge the manifestations in yourlife that you have been working on so diligently.  They have been showingthemselves by manifesting in small ways for awhile.  As you acknowledge eachsmall manifestation, give thanks for them.  As the dance moves forward and the tempo increases, you have greater power at your disposal to create and manifest more and more of your heart’s desires and dreams for the Highest Good.  This blessing keeps manifesting in greater ways for those who acknowledge and give thanks for that which they have already received. Blessings build upon blessings when there is acknowledgement and gratitude expressed with each occurrence from a sincere heart.  There are no miracles… only that which you have manifested through your Self with the blessings of the Creator and the those of the Golden Light.

Where you are out of harmony and balance you will find immediatedifficulties blocking your path, stymieing your progress and well being.Stop.  Look.  Listen.  Where do you find yourself blocked?  It is your Selfblocking you where you are not walking in harmony.  It is your Self showingyou what you need to work on now.  It is "nature’s way of showing yousomething’s wrong".  Any ill will or dark deed will immediately turn andmanifest on you now like the weight of a mountain.   When you find yourselfblocked, facing problems, etc., literally make a physical 180 degree turn toyour right and walk in the opposite direction. Follow through on thisphysical action with turning the mind and all thought, word, and deed in thepositive at the same time.  This is the time when all which is not inharmony with the Creator’s Will will rapidly manifest itself back at least10 fold to it’s source of origin.  All protection of false things has beenremoved.  Dark thoughts, words and deeds will be exposed for what they are and for their intent.  All is coming into the Light.  Your individual life is becoming an exact barometer of not only your actions, but all your thoughts, feelings, and intentions.  Dark energies can no longer be hiddenin secret.  As the Light increases more and more, all things will be shownin the Truth of the Light.  Walking your talk becomes more important witheach passing moment.  Anything which does not "grow corn", i.e. have apositive benefit in your life, needs to be removed and left completelybehind now and forever more.  Time to spring clean all the clutter from yourlife, be it people, thoughts, or things, which no longer serve your HighestGood and/or your spiritual progress. 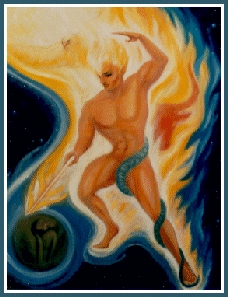 The battle between the forces of Light and the forces of dark is in fullswing.  Know that one can not be successful in overcoming anything bybattling it, for as soon as one thinks in terms of "winning", one hasalready lost.  To "win" means to overpower another or enforce one’s willupon them.  Victory "over" something means in Truth the subjugation ofanother’s Free Will through defeat of something else.  It is a violation of Universal Law.  In the "battle" between Light and dark, you "win" simply by b-e-i-n-g Light in all things.  Manifesting your Highest Good according to Free Will does not involve struggle against another or imposing your will onanother.   Leave yourself and your Self free of entanglements, which is ofthe Highest Good.  Chose not to "battle" but to Be.

If conflicts arise, simply turn the matter over to the Creator for theHighest Good of All and according to Free Will.  Let the Creator hold thereins, for whom is better qualified?  And call upon Archangel Michael andhis legions of angels of the Golden Light to remove from you that which hasany dark energy.  In this way you keep yourself free without struggle andwithout attachment dragging you down or back in this critical time oftransition.  In this way you are allowing the Creator and the Creator’sappointed ones to act, thus allowing you to be free of the entanglement andbalance your scales within and without.  Being feather light and Being Lightis the most important thing you can strive for or achieve now.  Do not allowthe Dark Forces to trap you with issues of struggle… shrug them off, turnthem over to the Creator and Archangel Michael, and tend to your"in-lighten-mint".  At this time of increasing "instant" manifestation,engaging in struggle, thinking in terms of "battle" or "winning", is only atrap by the clever dark ones, resulting in manifesting more struggle andnegative situations and keeping you continually wrapped in their lowervibrations, preventing you from achieving what you desire most…. movingupward and onward to the higher realms.  The dark ones thrive in creating avicious circle on even the most subtle levels.  Break the cycle ofentrapment in the game now.

1. Meditate.
2. Infuse yourself and all your relations with the Creator’s Golden Light.
3. Release all else to the Creator for the Highest Good andaccording to Free Will.  Let Omnipotence decide what is best.
4. Peace, advancement, and 3. spiritual freedom comes from the wisdom of being free of entanglements.
5. Acknowledge what you have manifested,
6. give thanks for the blessings and the lessons, and,
7. Surrender to the Will of the HighestGood.  Good things come in threes…  it is the number of the face of God.

Stay in the Golden Light of Christ,All My Relations in Love and Light,
Turtle Woman, Oma

Copyright 2004.  If forwarding, posting, printing, or sharing, please do so in its entirety with no changes, additions, or deletions… including this notice,  and remove all email addresses.  Thank you.