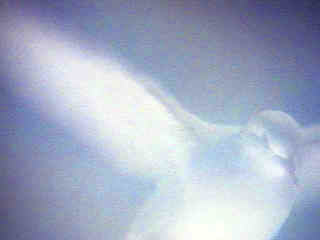 Original in Spanish, translation to English by Luis Prada.  See below an article by Dr. Deepak Chopra related to this conference.

From August 12 to 14, 2002,it was celebrated in Puerto Rico a Conference entitled "PEACE IN PEACE" ("PAZ EN LA PAZ") patronized by the "Arias Foundation for Peace and Human Progress" ("Fundación Arias para la Paz y el Progreso Humano") and the Senate of Puerto Rico.

This event gathered thinkers of diverse parts of the world with the same objective, to link the love and good will streams that exist in the world and are the hope of change that, as humanity, we are waiting for.  This Conference turned into a call from the deepest of human heart, to good sense, an invocation to sensibility.  When the primitive drums start to be heard calling once again to war, this DECLARATION serves as a balm to keep faith in the human being, and to recognize the ideas that, as a divine sow, will make grow, from the ruins of this ill-fated civilization, a new civilization of love and peace.  Make it circulate.  May this declaration also spring up victorious from our heart and we all then assume the same commitment.  Carmen Santiago.

We, women and men participating in the Conference Peace in Peace,

Seal here our commitment with the most noble aspirations of the human being gathered from all humanistic and religious traditions and which underline the celebration of life.

We appeal to the best of the values of humanity to resist:

We seal here our commitment to back up the application and fortification of an international law system, before whichcan be made responsible those who commit crimes against humanity.

We seal here our commitment to initiate a process of resistance to the selfishness and ignorance that keep us away from a better world for all, through the use of scientific and technological resources.

We seal here our commitment to protect the most innocent and sacred resource of humanity, their children.

We seal here our commitment to create a network of resistance that link individuals and organizations, which by concrete actions, denounce and reject policies, products and communication media, that threaten direct or indirectly the celebration of life.

We seal here our commitment to establish connections among human beings through the Global Strategic Alliance to support all policy, cause or action that favors respect for life, human dignity, liberty and Peace.

Participants in the Conference:

A Strategic Alliance for Peace and Human Progress

I recently attended a conference on peace and human progress hosted by Nobel Peace Laureate Oscar Arias and the Senate of Puerto Rico. The conference was attended by several other Nobel Laureates and also representatives from various governments. I had the privilege of giving a keynote speech at this conference and in the final meeting agreed to play the pivotal role in the creation of a global strategic alliance for peace and human progress.

Every 2½ seconds somewhere in the world a child dies from hunger or other preventable diseases.

Less than 4% of the world’s annual military expenditures would cure this situation. Since the end of World War II, more than 32 million civilians, mostly women, old men and children have perished as a result of hatred and ignorance and the sale of weapons sold by merchants of death and destruction.

By the year 2000, the military expenditures of the world were equivalent to 35% of total yearly income of nearly two billion people. Our hearts seem to be immune to the procession of televised imagery that continuously portrays a strange mixture of fiction, news and advertisement that constantly feed our addictions to adrenaline.

Organized religion has failed to achieve its highest purpose because it has so often fostered divisiveness and xenophobia, at times manipulating people through fear and violence.

Unfortunately, our religions are the legacies of our tribal ancestors whose ideologies and conceptual frameworks have generally failed to progress with our understanding of modern cosmology or evolution. Similarly, our current state of evolution demands that we re-examine our notions of nationalism. Tribalism has taken on the garb of nationalism so that mass murder during wartime is rewarded with medals of honor.

Einstein called "nationalism an infantile disease, the measles of humanity."

Erich Fromm said, "Nationalism is our form of incest, is our idolatry, is our insanity. Patriotism is its cult."

These are harsh words but unless we are prepared to honestly look at our outmoded beliefs, our unquestioned ideologies and ourselves, there may be no hope for us.

In regards to the Chopra Foundation, the new strategic plan is rapidly taking place. A number of notable goals and objectives are being considered. For example, the Chopra Foundation is going to take a leading role in the creation of the Global Strategic Alliance for Peace and Human Progress so that we can influence public opinion and ultimately public policy. We need a critical mass of people that will no longer participate or tolerate a culture of violence that is based on profound indifference to the pain of our fellow beings and lack of respect for life.

It took a critical mass of awareness to ban cigarette smoking in public places. Today the relatives of people who have died from cigarettes are suing tobacco companies.

It is quite conceivable that the day may come when the manufacturers of weapons will be held accountable when an innocent child dies at the hands of a gun.

Today governments label the deaths of thousands of innocent people as "collateral damage" so that we can numb ourselves to the anguish and images of horror through the use of words.

The only way to create the critical mass of awareness is to create a strategic global alliance of people and organizations that are contributing to spiritual growth as well as the betterment of humanity and the environment. Many Nobel Laureates, representatives of international humanitarian agencies, and influential people from governments around the world have greeted this idea with great enthusiasm.

To restate our goal — we want to create a critical mass of awareness that influences public opinion and policy so that we can take remedial measures and create a new culture where violence, weapons, poverty, ecological and environmental degradation and devastation can be addressed as the major epidemics of our time that need to be addressed with great urgency.

In this process it will be important not to think in terms of an us versus them psychology.

There is only one of us – we are one body in one world.

In the tangled hierarchy sinner and saint, divine and diabolical, sacred and profane are different faces of our collective Being. Therefore angry activism driven by rage, however justified it seems, is really not going to work. I believe that the tangled hierarchy wants us to move to the next state of evolution and very strongly desires us to take that quantum leap of creativity.

There are many other exciting things on the horizon.

I hope you will participate in some way by becoming a voice in our Foundation. If you wish to participate in any way in this endeavor, please send an email to

with your ideas and how you would like to participate.

The world’s consciousness is demanding an authentic spirituality that is based on a scientific understanding of the domain of awareness where we experience our universality. This is none other than our inner self.

It has been waiting patiently, inviting us to enter the luminous mystery in which all things are created, nurtured, and renewed. When we enter this luminous mystery of existence, we experience great wonder, humility and love.

Where there is wonder humility and love, there is the opportunity for healing.