of The Providence Journal

Leslie Kean is an investigative reporter and producer with Pacifica Radio based in the San Francisco Bay Area. She can be reached at lkean@ix.netcom.net  SAN FRANCISCO, September 16, 2002 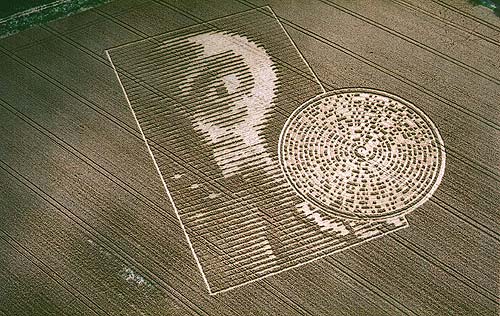 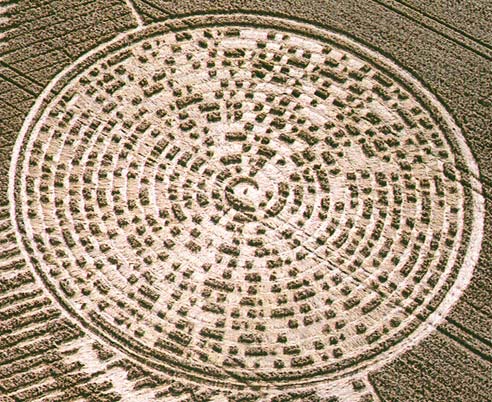 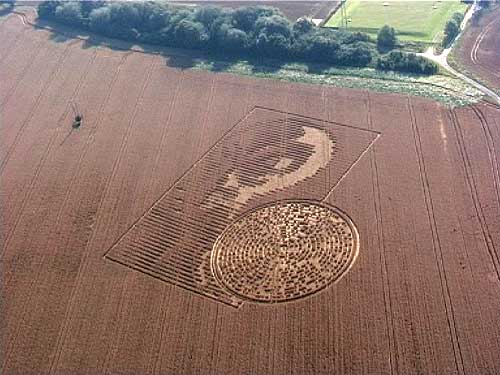 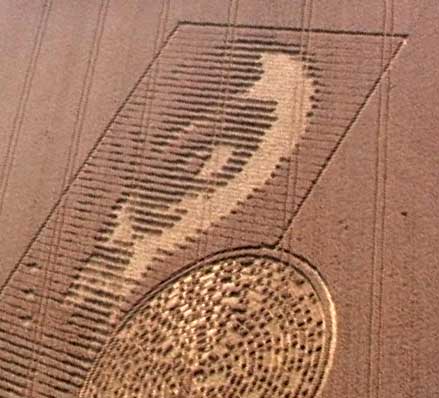 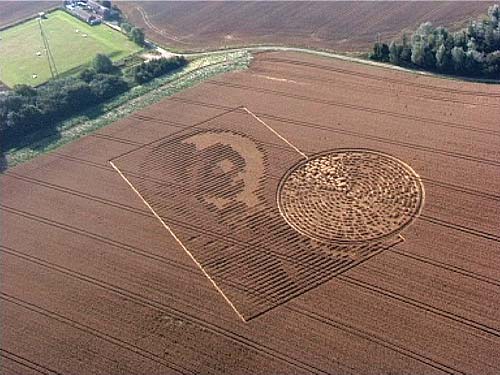 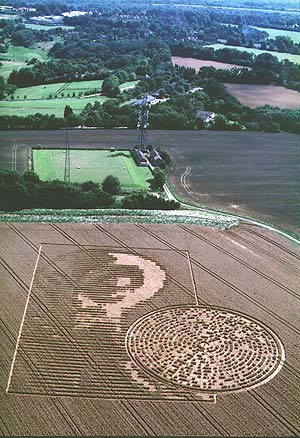 Crop Circles have fascinated me since the early nineties.  Each year, they become increasingly complex and intricate, displaying precise geometric designs of colossal size – some being hundreds of feet in diameter.  They are awesome and beautiful.

I get a good laugh each time I hear the doubters and debunkers claim that these “signs” are pranks and hoaxes.  Anyone who has studied photographs of crop circles and has reviewed the vast array of research available can only marvel in awe: these are truly creations that have no logical explanation whatsoever.

I firmly believe, as do many others, that crop circles are symbolic representations that only our sub-conscious mind can respond to.  These symbols have the power to initiate and alter perception.  It isn’t something that happens instantaneously.  Yet, it brings on a gradual awakening of awareness.  Anyone who works with sacred geometry will tell you that certain patterns are signature vibrations of ideas, thought, emotion and consciousness.  Whereas, verbal language is often clumsy and lacking effectiveness in conveying many ideas -especially the more abstract, the spiritual and the far-reaching – certain symbols literally embody concepts in their entirely.  A hypothetical example would be to have all the knowledge in a large textbook instantly down-loaded into your consciousness without having to read the material word for word.  A single symbol has the power to do just that.

Gazing upon the various crop circles can initiate change in a person’s consciousness.  After viewing a number of symbols, a person may eventually and inexplicably find themselves pursuing a new interest, thinking about ideas they’ve never had before, or come to find their viewpoints on life begins to expand.  There are many ways in which gazing upon certain crop circle symbols can shift perception – of themselves or the world around them.

The following article is an excellent, down-to-earth report of the phenomena.  At the end of the article is a link that will take you to a great website that displays numerous photos of the most recent crop circles – including the latest Dolphin symbol which has caused quite a stir.

The bottom line seems to be that something wonderful and mysterious is afoot here.  And I don’t think we’re going to find the answer to the origin of these “signs” by way of the usual scientific scrutiny.  Instead, I believe, that the answer is to be found in our own spirit and the ancient ancestral lineage that links our true origins with the stars – and those who still live there.

Big Thanks to Richard Boylan, PhD, for sending in the following article!

SINCE THE RECENT release of the movie Signs, crop circles have been thrust into the limelight. Such major publications as Scientific American and U.S. News and World Report have echoed the common belief that all crop circles are made by stealthy humans flattening plants with boards. This assumption would be fair enough if we had no information suggesting otherwise.

However, intriguing data published in peer-reviewed scientific journals clearly establishes that some of these geometric designs, found in dozens of countries, are not made by “pranks with planks.” In fact, a study about to be published by a team of scientists and funded by Laurance Rockefeller concludes “it is possible that we are observing the effects of a new or as yet undiscovered energy source.”

In the early 1990s, biophysicist William C. Levengood, of the Pinelandia Biophysical Laboratory, in Michigan, examined plants and soils from 250 crop formations, randomly selected from seven countries. Samples and controls were provided by the Massachusetts-based BLT Research Team, directed by Nancy Talbott. 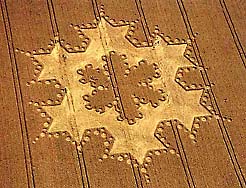 Levengood, who has published over 50 papers in scientific journals, documented numerous changes in the plants from the formations. Most dramatic were grossly elongated plant nodes (the “knuckles” along the stem) and “expulsion cavities” — holes literally blown open at the nodes — caused by the heating of internal moisture from exposure to intense bursts of radiation. The steam inside the stems escaped by either stretching the nodes or, in less elastic tissue, exploding out like a potato bursting open in a microwave oven.

Seeds taken from the plants and germinated in the lab showed significant alterations in growth, as compared with controls. Effects varied from an inability to develop seeds to a massive increase in growth rate — depending on the species, the age of the plants when the circle was created and the intensity of the energy system involved.

These anomalies were also found in tufts of standing plants inside crop circles — clearly not a result of mechanical flattening — and in patches of randomly downed crops found near the geometric designs. These facts suggested some kind of natural, but unknown, force at work.

Published in Physiologia Plantarum (1994), the international journal of the European Societies of Plant Physiology, Levengood’s data showed that “plants from crop circles display anatomical alterations which cannot be explained by assuming the formations are hoaxes.” He defined a “genuine” formation as one “produced by external energy forces independent of human influence.” 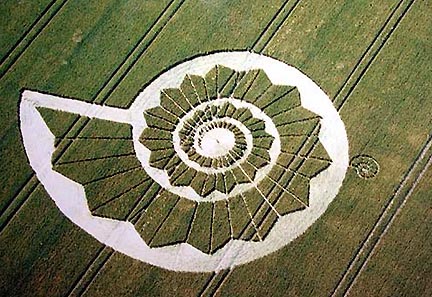 A strange brown “glaze” covering plants within a British formation was the subject of Levengood and John A. Burke’s 1995 paper in the Journal of Scientific Exploration. The material was a pure iron that had been embedded in the plants while the iron was still molten. Tiny iron spheres were also found in the soil.

In 1999, British investigator Ronald Ashby examined the glaze through optical and scanning electron microscopes. He determined that intense heat had been involved — iron melts at about 2,700 degrees Fahrenheit — administered in millisecond bursts. “After exhaustive inquiry, there is no mundane explanation for the glaze” he concluded.

In another paper for Physiologia Plantarum (1999), Levengood and Talbott suggested that the energy causing crop circles could be an atmospheric plasma vortex — multiple interacting electrified air masses that emit microwaves as they spiral around the earth’s magnetic-field lines.

Some formations, however, contain cubes and straight lines. Astrophysicist Bernard Haisch, of the California Institute for Physics and Astrophysics, says that such “highly organized, intelligent patterns are not something that could be created by a force of nature.”

But Haisch points out that since not all formations are tested, it is unknown how many are genuine. Nor is it likely that such complex designs could evolve so quickly in nature. “Natural phenomena make mountain ranges and form continents — they don’t learn geometry in ten years,” says Haisch, who is the science editor for the Astrophysical Journal.

In 1999, philanthropist Laurance Rockefeller made possible the most definitive — and most revealing — study to date. The BLT Research Team collected hundreds of plant and soil samples from a seven-circle barley formation in Edmonton, Canada. The plants had both elongated nodes and expulsion cavities, and the soils contained the peculiar iron spheres, indicating a genuine formation. The controls showed none of these changes.

Mineralogist Sampath Iyengar, of the Technology of Materials Laboratory, in California, examined specific heat-sensitive clay minerals in these soils, using X-ray diffraction and a scanning electron microscope. He discovered an increase in the degree of crystallinity (the ordering of atoms) in the circle minerals, which statistician Ravi Raghavan determined was statistically significant at the 95 percent level of confidence.

“I was shocked,” says Iyengar, a 30-year specialist in clay mineralogy. “These changes are normally found in sediments buried for thousands and thousands of years under rocks, affected by heat and pressure, and not in surface soils.” 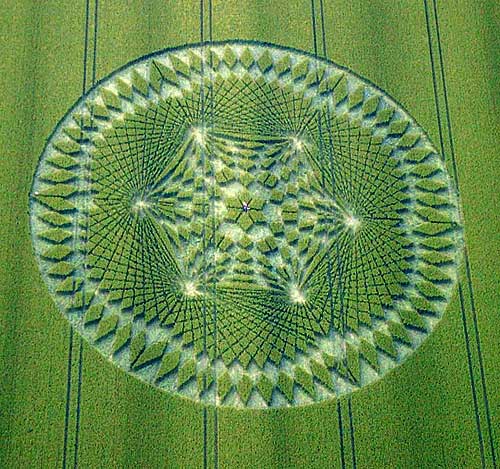 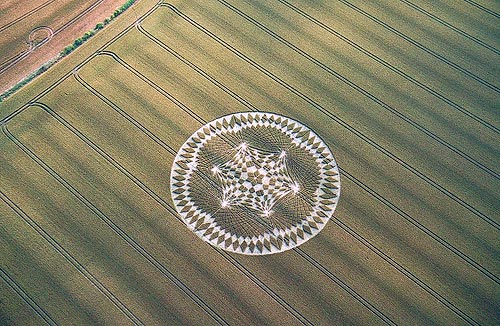 Also astounding was the direct correlation between the node-length increases in the plants and the increased crystallization in the soil minerals — indicating a common energy source for both effects. Yet the scientists could not explain how this would be possible. The temperature required to alter soil crystallinity would be between 1,500 and 1,800 degrees F. This would destroy the plants.

Understanding the possible ramifications of these findings, Talbott sought the expertise of an emeritus professor of geology and mineralogy at Dartmouth College, Robert C. Reynolds Jr., who is former president of the Clay Minerals Society. He is regarded by his colleagues as the “best-known expert in the world” on X-ray diffraction analysis of clay minerals.

Reynolds determined that the BLT Team’s data had been “obtained by competent personnel, using current equipment.”

The intense heat required for the observed changes in crystallinity “would have incinerated any plant material present,” he confirms in a statement for the Rockefeller report. “In short, I believe that our present knowledge provides no explanation.”

Meteorologist James W. Deardorff, professor emeritus at the College of Oceanic and Atmospheric Sciences at Oregon State University, and previously a senior scientist at the National Center for Atmospheric Research, states in a 2001 Physiologia Plantarum commentary that the variety, complexity and artistry of crop circles “represent the work of intelligence,” and not a plasma vortex. “That is why the hoax hypothesis has been popularly advocated,” he says.

However, he points out, the anomalous properties in plant stems thoroughly documented by Levengood and Talbott could not possibly have been implemented by hoaxers.  Deardorff describes one 1986 British formation in which upper and lower layers of crop were intricately swirled and bent perpendicular to each other, in a fashion that “defies any explanation.” 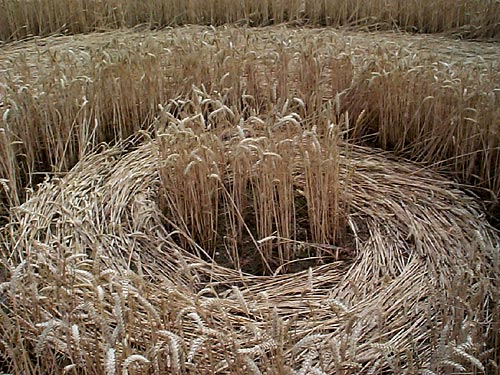 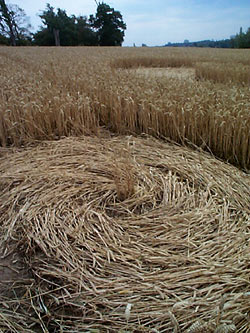 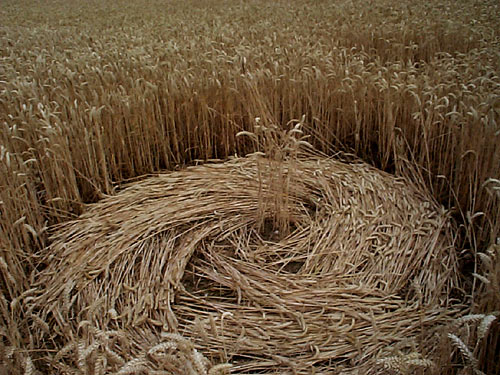 “People don’t want to face up to this, and scientists have to deal with the ridicule factor,” he said in a recent interview.

Adding to the puzzle, professional filmmakers have documented bizarre daytime “balls of light” at crop-circle sites. Light phenomena were observed by multiple witnesses at the site of the Canadian circle so meticulously examined under the Rockefeller grant.

Eltjo Hasselhoff, a Dutch experimental physicist, has taken on the study of what he describes as “bright, fluorescent flying light objects, sized somewhere between an egg and a football.”

Scientists face real and serious questions in confronting this mystery.  Could this be secret laser technology beamed down from satellites?  Is it a natural phenomenon?  Is there a consciousness or intelligence directing an energy form yet unknown to us? 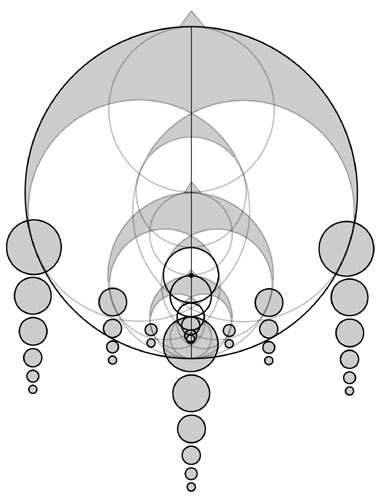 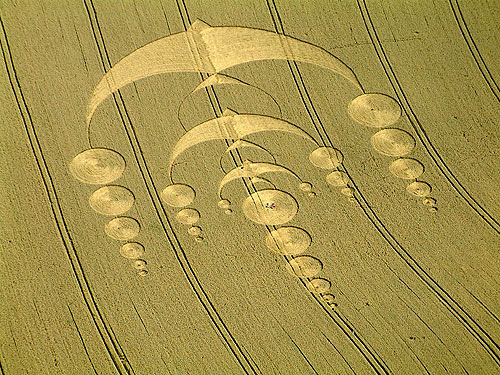 Dolphin Crop Circle ~ When you look at the Dolphin Crop Circle, note that the double parallel lines you see running through the formation are the tracks made by large farm tractors and the little “specks” on the lower right of the crop formation in the top photo is a group of people standing in a circle:

The image of the Dolphins shown above is courtesy of the The Crop Circle Connector, www.cropcircleconnector.com 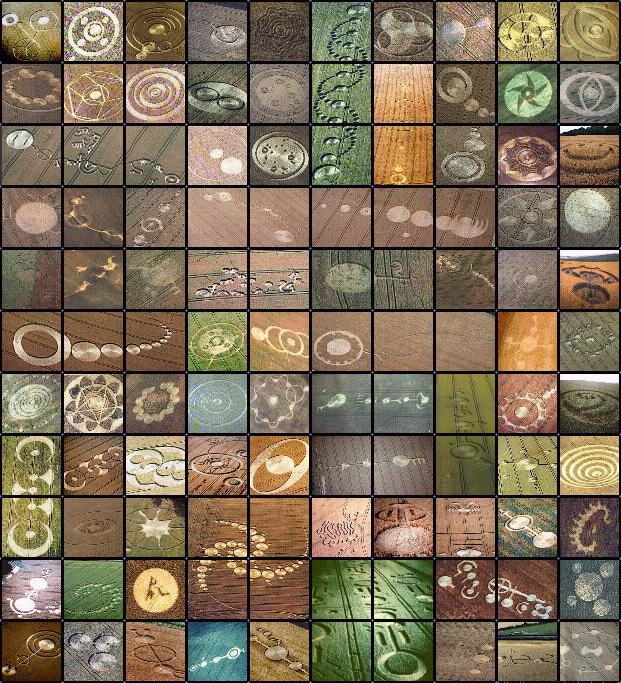 2 thoughts on “Origin of Crop Circles”