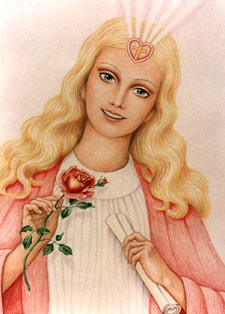 Lady Nada (Mary Magdalene) channeled by Jess Anthonywith comments from Candace Frieze.  Published in this website on May 21, 2006. Taken from:http://www.abundanthope.net/mb1a/forum/showthread.php?t=114&page=2

I couldn’t resist seeing what I could hear on the eve of the movie [The DaVinci Code]. Fascinating comments from Mary Magdalene on feminine energy and her role in balancing Earth.

I ask for comments this evening from Lady Nada, otherwise known as Mary Magdalene. We have not connected frequently, but I suspect there is a bond between us that I would like to strengthen. Of course, this is a time of particular focus on the Magdalene story. I do ask if there are comments you would make on that topic, as well as the role of the feminine in Earth changes. I recognize the pairing you have with Sananda and celebrate the twin soul merging you have realized.

Of course, Jess, I will speak with you. This is a glorious time on Earth. The return of the feminine energy is what was needed sorely to balance the harmony possible on Earth. For too long the feminine mystique or energy was missing from the equation of man’s endeavors. I say man literally. Man ignored woman and the female perspective to the detriment of all he pursued. He blindly lashed out at his fellow man in a false understanding of balance and cooperative power that comes from blending energies. Man is created to share his energy with the woman, as you so term them. This gender description is less defined in higher levels, but it still is the basis of shared energies with individual, distinctive make ups.

As souls are created, the Father Creator sends out sparks of himself in groups of energies. These sparks are bonded together in the sense that they have the same creative thrust, but they are separate in the sense that they are parts of a composite. These parts take the form of twin souls and group souls. There are pairings within the groups, as well as single entities that look for the entire group. This origination as a complex sets them on a course of attempting reunification once they assume their separate personalities and begin exploring their own assignments and interests.

Sananda and I were part of the same mix of souls. We were, in fact, paired as two halves of the same concept of knowing how to stay in connection with our divine creative spark despite the trials we would find ourselves undergoing. This awareness of the Creator was always there. This predisposed us to be beacons of lights that could show others the way to find their own inner connections. I pursued this through the heart and its influence on thoughts and emotions. I became the feminine receptive side. Sananda pursued this through the mind and its influence on actions and decisions. He became the masculine leader and initiator. We were a team that provided the full interaction that each man must seek and determine for his own enlightenment.

My role in this equation was long ignored and even hidden. I was castigated as my incarnation Mary Magdalene. I recognized that it was vital I incarnate at the same time Sananda Immanuel was incarnating as Jesus of Nazareth as part of the paired energy with Aton—Christ Michael, as you call him. His/their role was going to be crucial to the history of this planet, and it was necessary I be there to complete the energy composite that had to be created to trigger the shift that took place at that time.

Jesus Immanuel and I were lovers in the sense primarily of two halves sharing their energies. This was what has been referred to as sharing and merging our kundalinis. We became one again after many years of separation. This created a wave of new balance and harmony that helped raise the awareness enough to begin the move toward man’s self awakening. Our roles here at that time were to embody the physical and emotional aspects of the spiritual merging. We had a physical relationship as well as an emotional and mental understanding that went beyond any other. That is why I am described as understating Jesus Immanuel’s teachings better than anyone else. I saw the level of truth that was being expressed in ways others could not.

Historically speaking —which is what is of interest to many reading this— Jesus and I never married in a formal sense, but we did have the child Sa Ra, who was born after I arrived in France. That is, of course, the source of the Grail legend. Jesus and I separated in the confusion of the crucifixion scenario, and he had to flee to the East. He has told his part of the story in the Phoenix Journal he coauthored with Judas Iscariot, his friend. Jesus did go to India, and Mary his mother went with him. He formally married there and raised another family of literal descendants in India and Pakistan. That story is also true.

My history has been told in many new books, the most well known is, of course, the one the movie is based on. This is true in part and fictitious in parts. Where does the truth lie, you ask? My daughter Sa Ra did have descendants, and they are part of the hidden lineage that the Vatican and other political powers have tried very hard to exterminate. The truth in all this will be revealed soon, as well as the truth about Jesus Sananda and me, Mary Magdalene. I have come to resume my rightful place as consort with Sananda. Together we will be the example of a unity of paired souls that will inspire future relationships man will pursue. I have come to bring balance and compassion again.

I finally got around to chatting with Nada today. Delightful lady, warm and funny. I have said in one or more places that SaRa was born shortly before the arrival on French shores. I thought Sananda told me this, but maybe I mixed it with something else I read. I assume Nada is quite sure of when SaRa was born, so I will go with that she was born after the arrival in France. Some sources state she was born in Egypt and was 12 years old, and Nada nixes this. The vessel she and others were on was set into the Mediterranean without sails or oars, hoping of course they would all be lost at sea. Divine help got them safely to France.

I was happy in this to see the spelling of SaRa’s name in Jess’ work above, which is often written as Sarah, in other tellings of the story. Both Sananda and Nada confirm it was pronounced Saw Raw, not as Sarah is usually pronounced. I loved this message because it backed up what Sananda as told me, including that they did not have a formal Jewish marriage ceremony. I bet the Christians will not be too happy with that knowledge. Oh well. I do watch with interest on TV about the DaVinci Code. I read the book, the movie looks kind of trashy to me, not sure I will see it or wait until I can rent it rather than sitting through it in a theater.

I basically liked the book, but got really bored with the action parts of it. The trailers of the movie look like there is a lot of focus on the action. I don’t own a copy, I borrowed one from the library. I will attempt to get a paper back of it, so I can mark it up. I don’t recall why it ended in England. Joseph of Arimathea visited England during his journeys selling tin. He took young Yeshua with him on some of his trips to various parts of the world at that time, during the 30 or so lost years. There are legends in England about these visits. I believe they have ballads that talk of Joseph The Tin Man and Yeshua. The earliest Christian churches were in Europe, in England and France, long before the church of Rome was established.

There is partial truth in the story of the Magdalene being a "whore." Not by her choice. She was promised in marriage to a wealthy Jew for all the family and business reasons desired. She was sent against her will in a caravan to meet her arranged husband and along the way she caravan was attacked and she was kidnapped, raped and sold to a man who then used her as a prostitute. "Pimping" is as old as prostitution. I assume this was the workings of the dark side. She was found and returned and she and Sananda found each other as was originally planned. Sananda denies that she had 7 demons. He found her rightfully angry, but not having any demons. This was the creation of the Catholic church or other rumors apparently.