Jesuits, Controllers of the Vatican
and the New World Order

Taken from: http://groups.yahoo.com/group/DiscerningAngels/message/20745.  Published in this website on September 27, 2006. See also in this website another related article, The Truth About the Catholic Church. 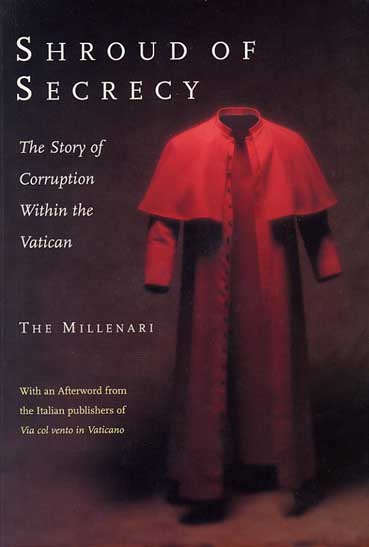 Confession No. 16: Former Bishop of Guatemala Claims Jesuits Control the and Are the Real Spiritual Controllers of the Order.
Bishop Gerard Bouffard says the Jesuit General, Fr. Peter Hans Kolvenbach, gives the marching orders to the Pope. He also backs up the accusations made by the late Fr. Alberto Rivera about the evil Jesuit Order.

Former Bishop Gerard Bouffard of said the is "the real spiritual controller" of the Illuminati and New World Order while the Jesuits through the Black Pope, Jesuit Gen. Fr. Peter Hans Kolvenbach, actually control the hierarchy and the Roman Catholic Church.

Bishop Bouffard, who left the Church and is now a born again Christian livingin Canada, based his conclusion after working six years as a Vatican priest, assigned the task of passing daily, sensitive correspondence between the Pope and the leaders of the Jesuit Order residing at Borgo Santo Spirito 5, near St. Peter’s Square.

"Yes, the man known as the Black Pope controls all major decisions made by the Pope and he in turn controls the Illuminati," said Bishop Bouffard last week on Greg Szymanski’s radio show, The Investigative Journal, atwww.gcnlive.com where archives of the startling statements can be heard in their entirety.

"I know this to be true since I worked for years in the and traveled with Pope John Paul II. The Pope takes his marching orders from the Black Pope as the Jesuits also arte the leaders of the New World Order, with the task of infiltrating other religions and governments of the world in order to bring about a one world fascist government and a one world religion based on Satanism and Lucifer.

"People can’t imagine how evil and how much destruction they have caused and will cause while, at the same time using the perfect cover of hiding behind black robes and professing to be men of God."

Bishop Bouffard’s first hand knowledge of the evil lurking within the hierarchy of the Vatican and particularly the Jesuit Order confirms the testimony of other researchers, including Bill Hughes, author of the shocking books The Enemy Unmasked and The Secret Terrorists, as well as preeminent researcher of the Jesuit Order, Eric Jon Phelps, author of Vatican Assassins.

Besides painting a dark picture of the Black Pope in , Bishop Bouffard claims the evil power of the Jesuits extends throughout the world, including   solid infiltration of the government, the Council on Foreign Relations () and major religious organizations.

Bishop Bouffard claims the Jesuits act like the perfect chameleons, taking on the identity of Protestants, Mormons, Baptists and Jews with the intention of bringing about the downfall of as well as bringing the country under a one world religion based in and under the control of their leader, Lucifer.

"I know first hand that the Vatican controls and monitors everything in Israel with the intention of destroying the Jews," said Bishop Bouffard, adding the true purpose of the Jesuit Order is to orchestrate and control all leaders of the world in order to bring about a major worldwide conflict which will eventually destroy America, the Middle East and Israel. "They destroy everything from within and want to bring about the destruction of the Catholic Church, as well, in order to usher in a one world religion based on Satanism. This is also seen in the way priests worship in the Mass, actually worshipping the dead. Also, signs of Satanism are seen in many outward symbols, customs and vestments displayed by the Church."

After his service in , Bishop Bouffard spent time in and , rising to a position of power within the Church. However, with this religious power came affiliation and membership as a Freemason,   becoming a 37 Degree Masonic member, something supposedly frowned upon in the Roman Catholic Church since, according to Canon Law, membership in a Masonic Lodge brings immediate excommunication.

According to Bishop Bouffard, Freemasonry is used by the Church to carry out its secret plans, as many other high-level priest, bishops, cardinals and even popes have joined secret societies along with others in positions of power in other religions and governments, many working together to further the evil Illuminati agenda.

And his statements back up reports which surfaced in Italian and French newspapers in the early 1980’s, reporting more than 150 high level priests with membership in Freemasonry, including the P2 Masonic Lodge and other secret societies.

"I finally was born again and denounced the Catholic Church," said Bishop Bouffard, who now is a practicing Christian following the word of God through the Bible. "We must always pray for our leaders by openly denouncing evil and exposing the Jesuits for what they really are."

After leaving the Church, Bishop Bouffard also made amends and asked the late Jesuit priest, Fr. Alberto Rivera for his forgiveness. Fr. Rivera was one of the few Jesuit priests with the courage to expose the evil intentions of the Society of Jesus, coming forward telling how he worked as one of the Jesuit Order’s infiltrators in America with the job of infiltrating Protestant and Baptist churches with the intent of destroying them from within.

"When I was a bishop and still loyal to the Church, I once wrote a letter denouncing Fr. Rivera and advocating his death," said Bishop Bouffard. "When I realized the truth, I searched out Frt. Rivera and asked his forgiveness. We became good friends and I know he was telling the truth. He was an honest many who also found God.

"I know the Jesuits tried to change the truth, saying he never was a priest and destroying all evidence backing that up. They have tried to do the same to me, but Fr. Rivera was telling the truth without question. I know that for a fact and even was with him several weeks before his death. He was suffering terribly after being poisoned with acid. Like I said, you can’t imagine the suffering and destruction that has been caused and will be caused by the Jesuits"

In an article entitled Alberto: the Big Brou-haw-haw, an unknown writer who followed Bishop Bouffard career and his connection with Fr. Rivera had this to say, including the ‘s difficulty in trying to cover-up both Rivera and Bouffard’s accusations.

"Then there’s the corroborating testimony provided by Fr. Gerard Bouffard. He was a high ranking bishop born in . He rose from lower levels of his orders to become an assistant for many years to Popes such as Paul VI and John Paul II. He converted to Protestantism and claims he was the man who received the order to eliminate Rivera. In a documentary called Unveiling the Mystery Behind Catholic Symbols, Bouffard shows a fancy 18-carat gold plated pen containing a special disappearing ink with which the Holy Office authorities sign top secret documents. He claims, "With this pen that I am holding, I signed the order to kill Dr. Rivera". Pretty dramatic cloak and dagger stuff! His previous high profile position would make him an easy target for discrediting… Yet the silence is deafening.

"The also has its own credibility problems to contend with. From a historical context, Alberto’s claims to be a Jesuit working undercover to destroy protestant churches is not as far flung as it might seem. The Jesuits were created in 1541 by Ignatius De Loyola for that very purpose (although some Jesuits dispute this, naturally). They engaged in countless dirty tricks, assassinations, and treasonous plots during their hay day. The Office of the Inquisition was an out growth of their mission which resulted in the torture and/or murder of millions of innocent people for "heresy". That department has since been renamed The Holy Office, but the Jesuits have never bothered with a name change. How much their goals have changed with time is also a uncertain. Neither organization is very transparent and both serve the interests of the Pope. Bad reputations are not easily forgotten.

"If Alberto’s story is a lie, it’s brilliant piece of fiction with amazing consistency. There are certainly other conspiracies that have been dreamed up which are equally vivid and intricate. The JFK assassination conspiracy and the UFO /Majestic 12 conspiracy come foremost to mind. But these conspiracies were created and improved by hundreds of people over a long period of time, then pieced together and rearranged until they formed a plausible narrative. After twenty or so years of "public input" and revisions, a semi-"official" version is adopted. If any particular part of it is proven to be false, it morphs into a slightly different version without the disproven parts.

"Alberto had none of these resources. His own story came from him alone. It wasn’t revised and honed for decades by committee before Chick published it. On the contrary, it was published in its entirety and then sublimated with additional volumes (five more comics) giving more names and dates but no retractions. If he in fact "made it all up", then he certainly deserves a prize for literary genius. Especially as far as his own biographical intrigues are concerned (move over Baron von Munchausen?).

"After twenty years of investigation, all the Pope’s resources have failed to "prove" Alberto was a fake. Of course, Alberto failed to "prove" his allegations against the as well. So at best, the contest is still a draw. Maybe future developments will yield something dramatic. But don’t count on it. We’ll probably never know if Alberto was really "real" unless the Pope were to come straight out and confess it. (And that stands about as much of a chance of happening as a flying saucer landing on the White House lawn.) It is definitely delicious food for thought, however, and far more scary than any premise aired on X-files.

To read a defense of Alberto from the Chick site, go here: http://www.chick.com/reading/books/199/0199cont.asp

Throughout history, the Jesuit Order has been tied together with war and genocide, being formally removed from many countries, including and . As researchers claim the Jesuits are the real spiritual controllers of the New World Order, author Phelps has also called for the Order’s banishment in this country.

However, with more than 28 major universities from coast to coast, the Order has created a strong political and financial foothold here, including secret control of the and control of many banks like Bank of America and the Federal Reserve banking system, making Phelps’ call for banishment a difficult if not improbable task.