To be used in official information to the public and in public artwork of the Brother Veritus’ Community. Published for the first time in this website on Monday March 3, 2014. 3-3-7, numbers used in this design.

All graphics designed and illustrated by Luis Prada, Editor and Publisher of BVW and Director of BVC.Available also in Spanish language.

With so much love and longing to collaborate with Christ Michael, Governor of the Universe of Nebadon, and Esu Immanuel Sananda, the Planetary Prince of Urantia, in a combined effort to return Urantia to her former glory 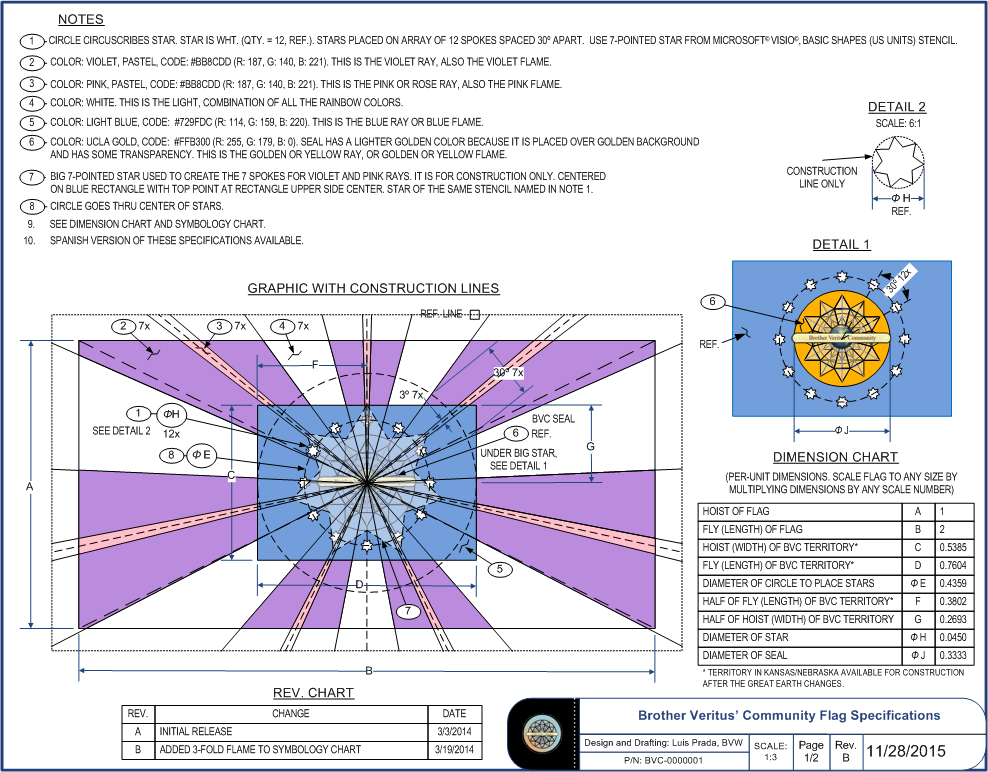 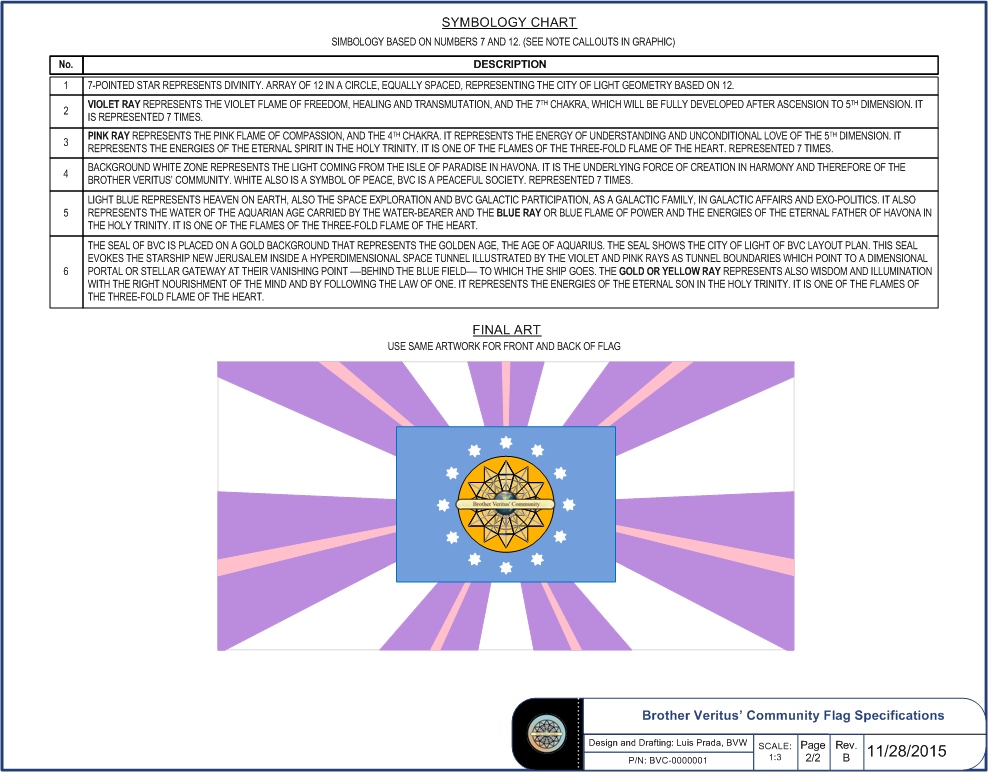 Clarification Note: The design graphics were finished and uploaded to the web on March 3, 2014, but updates in new revisions are made as required.  The frame template has a macro for the date field that displays the date of latest change, that is why the drawing shows date 3/20/2014.

★Three-fold Flame of the Heart★

Concepts Used in the Design of the BVC Flag

Original in Spanish, translation to English by Luis Prada, Editor and Publisher of Brother Veritus’ Website. 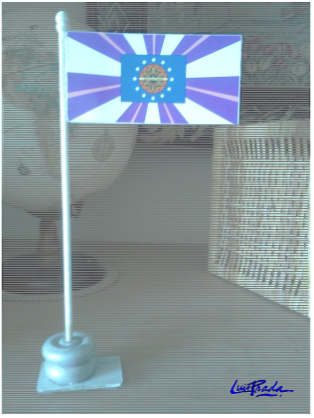 I hope you have already read the material on the BVC flag.  When you do, take your time to detail it.  Note, for instance, that all the lines are not put arbitrarily but obey to a very precise geometry that does not give other choice.  I want to give you other details of the flag design, if you allow me:

The flag is given in per-unit dimensions.  That means that its dimensions are not given in a particular measuring unit.  They give the proportion and with them it can be drawn or fabricated utilizing any unit of measurement.

The stars are 7-pointed, since it is the symbol of the Father of Havona.  He is infinite and that star is not precise, it has decimals that go to infinity.

The height is 1, the width is 2, that is, its shape is made by two squares attached to one another by their sides.

It does not use the aurean or golden proportion of phi.

The only one that is completely out of these proportions is the dimensions of the blue field.  Those dimensions are of the blue field of the US flag.  I did not want to modify it but left it as in that flag since it will be the new flag of the United States and that is the contact with the former flag.

The colors of the rays relate to two colors predominant during the Age of Aquarius, the one of the Violet Flame and the one of the Pink Flame. I did not want to use the original violet color since it is too intense and takes away the attention on the central seal, besides it looks too grating. White is the union of the rainbow colors. It is the spiritual Light that comes to us from Havona. It is a neutral zone. As in the USA flag, there it also has white.

[José Orlando: And in what part of the City of Light will the flag be exhibited?]

In public buildings as it is exhibited now in the United States.  For example, in the Supreme Court of Justice, in the Central Library, in the Main Temple, in the Palace, etc.

(I am going to make a drawing where in detail it is shown the master plan of the City of Light over Kansas but using the map of Scallion of the future earth changes.)

Somehow this flag was inspired by the flag of the United States, but modified to introduce the concepts of the New Age and the future society.  It has stripes, white and the other of a different color, it has blue with stars except that it has the seal or shield in the center as it is in flags of many countries, such as Colombia, Argentina and Bolivia.  It goes from the 5-pointed star to the one of 7, of 50 stars to 12, of thirteen stripes to 14, two of 7, the pink is other extra that gives 7, but it is integrated in the violet.  The blue field is of the same dimensions, but the blue is less intense, it is lighter.

The width of the US flag has an error, it should be a little wider, perhaps it was an error when making the original flag. But in the one of the BVC there is no that error.

[José Orlando: It is like using the numbers and symbology in a positive sense.]

Yes, José O., that is the case when sacred geometry is used in the design, because it is used the geometry that is utilized by the Divine Architects in their designs of nature.

[Blanca: The US flag was not made with precise measurements.]

It does have precise measurements, but the problem was that the width was left imprecise, the size of the blue field is correct since it follows the geometry of the stripes.

The US flag has a pretty design but as the USA throughout history has been an imperialistic and aggressive nation and violent throughout the world, it has damaged its global image and that flag is hated by the majority of people of other countries.  That is why the new flag should not have the same colors and similar design since it is besmirched by the blood that the American troops have shed in their invasion of countries to increase the wealth of the Illuminati in their corporations.

Better said, in our BVC we want nothing to do with these atrocities, one of them is the Guantanamo jail and some others of the CIA in other countries such as Germany and Iraq.

Red is the color of Mars, the God of War. We use violet, of the Violet Flame, it is a pastel feminine tone.  We should honor the Return of the Goddess.  The pink color is also associated with the feminine energy. The pink color I used is not pastel, it is a standard pink.

[José Orlando: Thank you for such valuable explanation, Mr. Luis, for me you are a man 10 for your great knowledge on all subjects.  I congratulate you.]

Thank you, dear José O., for you comments.

[Blanca: Don Luis, excellent work with the Community flag. You deserve the 5 *****]