Why the Dollar Bubble Is About to Burst

Why the Dollar Bubble Is About to Burst
The Iranian Oil Bourse
June 15, 2006 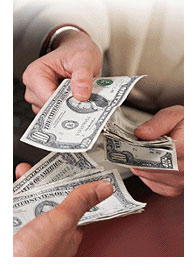 Beloveds, when the BEAST is cornered it becomes very dangerous and unpredictable.  The writings on the wall for everyone to see indicate that the CABAL’s Corp. U.S. "BEAST" has been cornered, i.e., caught in its own "greed-net", and that will fight for its life pretty soon.  The evolution of these planetary events is not only watched by the whole world but is also carefully monitored from the on Highs.

The Voice (issue 264 – 11th May, 2006) ran an article beginning," has really gone and done it now. No, they haven’t sent their first nuclear sub in to the . They are about to launch something much more deadly — next week the Iran Bourse will open to trade oil, not in dollars but in euros." This apparently insignificant event has consequences far greater for the people, indeed all for us all, than is imaginable.

Currently almost all oil buying and selling is in US-dollars through exchanges in and . It is not accidental they are both US-owned.

The Wall Street crash in 1929 sparked off global depression and World War II. During that war the supplied provisions and munitions to all its allies, refusing currency and demanding gold payments in exchange.

By 1945, 80% of the world’s gold was sitting in US vaults. The dollar became the one undisputed global reserve currency — it was treated world-wide as `safer than gold’. The Bretton Woods agreement was established.

The took full advantage over the next decades and printed dollars like there was no tomorrow. The US exported many mountains of dollars, paying for ever-increasing amounts of commodities, tax cuts for the rich, many wars abroad, me rcenaries, spies and politicians the world over. You see, this did not affect inflation at home! The got it all for free! Well, maybe for a forest or two.

Over subsequent decades the world’s vaults bulged at the seams and more and more vaults were built, just for US dollars. Each year, the spends many more dollars abroad that at home. Analysts pretty much agree that outside the , of the savings, or reserves, of all other countries, in gold and all currencies — that a massive 66% of this total wealth is in US dollars!

In 1971 several countries simultaneously tried to sell a small portion of their dollars to the for gold. Krassimir Petrov, (Ph. D. in Economics at ) recently wrote, "The US Government defaulted on its payment on . While popular spin told the story of `severing the link between the dollar and gold’, in reality the denial to pay back in gold was an act of bankruptcy by the US Government." (1) The 1945 Bretton Woods agreement was unilaterally smashed.

The dollar and economy were on a precipice resembling in 1929. The now had to find a way for the rest of the world to believe and have faith in the paper dollar. The solution was in oil, in the petrodollar. The viciously bullied first and then OPEC to sell oil for dollars only — it worked, the dollar was saved. Now countries had to keep dollars to buy much needed oil. And the could buy oil all over the world, free of charge. What a Houdini for the ! Oil replaced gold as the new foundation to stop the paper dollar sinking.

Since 1971, the printed even more mountains of dollars to spend abroad. The trade deficit grew and grew. The sucked-in much of the world’s products for next to nothing. More vaults were built.

Expert Cóilínn Nunan wrote in 2003, "The dollar is the de facto world reserve currency: the currency accounts for approximately two thirds of all official exchange reserves. More than four-fifths of all foreign exchange transactions and half of all world exports are denominated in dollars. In addition, all IMF loans are denominated in dollars." (2)

Dr. Bulent Gukay of recently wrote, "This system of the US dollar acting as global reserve currency in oil trade keeps the demand for the dollar `artificially’ high. This enables the to carry out printing dollars at the price of next to nothing to fund increased military spending and consumer spending on imports. There is no theoretical limit to the amount of dollars that can be printed. As long as the has no serious challengers, and the other states have confidence in the US dollar, the system functions." (3)

Until recently, the US-dollar has been safe. However, since 1990 western Europe has been busy growing, swallowing up central and eastern Europe. French and German bosses were jealous of the ability to buy goods and people the world over for nothing. They wanted a slice of the free cake too. Further, they now had the power and established the euro in late 1999 against massive US-inspired opposition across , especially from – paid for in dollars of course. But the euro succeeded.

Only months after the euro-launch, Saddam’s announced it was switching from selling oil in dollars only, to euros only — breaking the OPEC agreement. ,,,, all began talking openly of switching too — were the floodgates about to be opened?

Then airplanes flew into the twin-towers in September 2001. Was this another Houdini chance to save the US (petro) dollar and the biggest financial/economic crash in history? War preparations began in the . But first war-fever had to be created — and truth was the first casualty. Other oil producing countries watched-on. In 2000 began selling oil in euros. In 2002, changed all their petro-dollars in their vaults into euros. A few months later, the began their invasion of .

The whole world was watching: very few aware that the was engaging in the first oil currency, or petrodollar war. After the invasion of in March 2003, remember, the secured oil areas first. Their first sales in August were, of course, in dollars, again. The only government building in not bombed was the Oil Ministry! It does not matter how many people are murdered — for the , the petrodollar must be saved as the only way to buy and sell oil — otherwise the economy will crash, and much more besides.

In early 2003, Hugo Chavez, President of Venezuela, talked openly of selling half of its oil in euros (the other half is bought by the ). On

In November 2000 the euro/dollar was at $0.82 dollars, its lowest ever, and still diving, but when started selling oil in euros, the euro dive was halted. In April 2002 senior OPEC reps talked about trading in euros and the euro shot up. In June 2003 the occupiers of switched trading back to dollars and the euro fell against the dollar again. In August 2003 starts to sell oil in euros to some European countries and the euro rises sharply. In the winter of 2003-4 Russian and OPEC politicians talked seriously of switching oil/gas sales to the euro and the euro rose. In February 2004 OPEC met and made no decision to turn to the euro — and yes, the euro fell against the dollar. In June 2004 announced it would build an oil bourse to rival and , and again, the euro rose. The euro stands at $1.27 and has been climbing of late. See the European Central Bank history of the euro/dollar: http://www.ecb.int/stats/exchange/eurofxref/html/eurofxref-graph-usd.en.html#1999

But matters this month became far, far worse for the US dollar. On 5th May registered its own Oil Bourse, the IOB. Not only are they now selling oil in euros from abroad — they have established an actual Oil Bourse, a global trading centre for all countries to buy and sell their oil!

In Chavez’s recent visit to he talked openly about supporting the Iranian Oil Bourse, and selling oil in euros. When asked in about the new arms embargo imposed by the against , Chavez prophetically dismissed the as "a paper tiger".

Currently, almost all the world’s oil is sold on either the NYMEX, New York Mercantile Exchange, or the IPE, ‘s International Petroleum Exchange. Both are owned by US citizens and both sell and buy only in US dollars. The success of the Iran Oil Bourse makes sense to, which buys 70% of ‘s oil. It makes sense for , which sells 66% of its oil to . But worse for the , and have already stated they are very interested in the new Iranian Oil Bourse.

If there is a tactical-nuclear strike on – deja-vu – `weapons of mass destruction’ in , who would bet against a certain Oil Exchange and more being bombed too?

And worse for Bush. It makes sense for ,, and — as well as all the other countries mentioned above — to buy and sell oil in euros. They will certainly have to stock-up on euros now, and they will sell dollars to do so. The euro is far more stable than the debt-ridden dollar. The IMF has recently highlighted US economic difficulties and the trade deficit strangling the — there is no way out.

To survive, as the Scottish Socialist Voice article stated, "the , needs to generate a trade surplus to get out of this one. Problem is it can’t." This is spot on. To do that they must force US workers into near slavery, to get paid less than Chinese or Indian workers. We all know that this will not happen.

What will happen in the ? Chaos for sure. Maybe a workers’ revolution, but looking at the situation as it is now, it is more likely to be a re-run of post-1929, and some form of extreme-right mass movement will emerge.

Does and China/Asia have the economic independence and strength to stop the whole world’s economies collapsing with the ? Their vaults are full to the brim with dollars.

The has to find a way to pay for its dollar-imperialist exploitation of the world since 1945. Somehow, eventually, it has to account for every dollar in every vault in the world.

Bombing could backfire tremendously. It would bring openly into the war in , behind the Shiite majority. The cannot cope even now with the much smaller Iraqi insurgency. Perhaps the will feed into the Sunni v Shiite conflict and turn it into a wider Middle-East civil-war. However, this is so dangerous for global oil supplies. Further, they know that this would be temporary, as some country somewhere else, will establish a euro-oil-exchange. Perhaps in .

There is one `solution’ — scrap the dollar and print a whole new currency for the . This will destroy 66% of the rest of the world’s savings/reserves in one swoop. Imagine the implications? Such are the desperate things now swimming around heads in the White House, Wall Street and Pentagon.

Another is to do as did, just before invading in 1938. The Nazis filmed a mock Polish Army attack on , to win hearts and minds at home. But again, this is a finger in the dam. So, how is the going to escape this time? The only global arena of total superiority left is military. Who knows what horrors lie ahead. A new world war is one tool by which the could discipline its `allies’ into keeping the dollar in their vaults.

The task of socialists today is to explain to as many as possible, especially our class, that the coming crisis belongs purely to capitalism and (dollar) imperialism. Not [from] people of other cultures, not Islam, not the axis of evil or their so-called WMDs. Their system alone is to blame.

The new Iranian Oil Bourse, the IOB, is situated in a new building on the free-trade-zone , in the . Its computers and software are all set to go. The IOB was supposed to be up and running last March, but many pressures forced a postponement. Where the pressure came from is obvious. It was internationally registered on 5th May and supposed to open mid-May, but its opening was put off, some saying the oil-mafia was involved, along with much international pressure. Just Google ‘
pertroeuro’, and the story lies before you.

From now on, anyone in the know will wake up every morning and, even before coffee, will check out the latest exchange rate between the euro and dollar.