Reflections on Paul Levy’s – The Madness of George W. Bush

George Bush is an empty suit Manchurian creation of nepotistic fate who serves as a lightning-rod diversion to distract people’s attention away from the actual hidden evil daemon that are manipulating our planet through wars, finance, false religion, and a reconditioning of our mental faculties. To confuse George W. Bush with these individuals, or to transfer their tendencies onto him, is to make a very grave error in analysis.

George Bush did not start our current war; George Bush did not rig the past two elections; George Bush does not believe he’s led by God (he doesn’t even believe in God, but rather bows to an occult Skull & Bones diety); George Bush is not a conservative, and George Bush is not enemies with Osama bin Laden, Saddam Hussein, or even Al Gore and John Kerry. It’s all a con-job because these individuals are all on the same team, and they’re all serving the same masters in one capacity or another. And what is their ultimate goal as they sell their souls? Answer: to preserve the controlling elite’s status quo, and subsequently their positions of subservient power within it. George Bush is merely a puppet; a figurehead; and an implementer. The biggest decision he makes each day is what kind of cereal he’s going to eat for breakfast. If you doubt this statement, ask yourself a simple question: if YOU were running the world, would you let George W. Bush be the CEO? Hell, the Bushes don’t even trust him enough to run their own family business! So, in this sense, he’s nothing more than a dangling carrot that is used as either a figure of adoration for the kool-aid conservatives, or a symbol of disdain for the lockstep liberals. And every time somebody characterizes George Bush as either a hero or a Hitlerian spawn, or focuses their wrath upon him, they’re falling into a carefully laid trap that is used to dupe us into a morass of myopic blindness. Yet for some inexplicable reason, many people who should know better still allow themselves to be bamboozled by this illusory left/right paradigm.

The only way to avoid this malignant brainwashing-propaganda is as such:

1) If an information source is pushing strictly partisan «Republican» or «Democrat» politics, dump it immediately. They’re obviously leading you in the wrong direction.

2) If an information source is promoting heavy doses of fear-mongering over empowerment, dump it immediately. They’ll eventually paralyze you into submission.

3) If an information source denies the existence of an unseen ruling hierarchy beyond that portrayed by our corporate-controlled establishment media, dump it immediately because their intent is to stifle rather than enlighten you.

To free yourself from the possibility of being misled, examine each and every information source that you get your news from and see if they fall prey to the aforementioned snares. If they do, ask yourself a very serious question: are they serving your best interests? 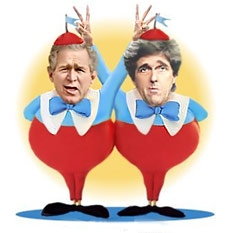 Please, remember: George Bush, Bill & Hillary Clinton, Ronald Reagan, and John Kerry are not (and were not) the ultimate idols and demons. They’re simply conduit/actors on the public stage who are advancing the goals of those behind the veil. Before you get the wrong idea, I am by no means dismissing these figures as innocent provocateurs, because they definitely have plenty of blood on their hands. But in the same breath, they also do not merit the vast amount of attention and derision that is heaped upon them. If you really want to get angry, at least unleash your venom at the appropriate targets! As the great writer Antoine de Saint-Exupery once wrote: «What is essential is invisible to the eye.» In other words, the true fiends that are destroying our world and feeding off their hosts (that means us – everyday people) like parasitical vampires are far-removed from the glare of public exposure. And in all honesty, that’s the way they like it. The doers of evil deeds are much more attracted to the darkness than they are to the light.

Which brings me to a recent article by Paul Levy entitled The Madness of George W. Bush: A Reflection of our Collective Psychosis. Levy wrote, «Bush and his regime are compulsively driven to do everything and anything they can to hold onto the position of power they find themselves in.» Although this statement is true on a cursory level, the same could be said for the Clintons, Mussolini, the Duvaliers, or your local corrupt county commissioner. Power breeds a sickness for additional power that more resembles a deformed bastard stepchild than it does what would be considered a normal birth. The point is: Levy ends his analysis with George W. Bush, and doesn’t extend it any further. The thirst for power seen in the Bush/Clinton cabal is mere child’s play in comparison to that of the real controllers. Why, you may wonder? Because these hired guns are merely ephemeral, or temporary, rulers. They’re expendable, and can be easily dismissed if they fall out of favor with their overlords. But those who have been atop the control pyramid for generations have an unquenchable thirst for power that makes our public puppeteers look like mere Boy Scouts.

That’s why I found Levy’s article so disappointing and damaging. He acts as if George W. Bush is the end-all and be-all of every evil; when in reality Bush is simply just another in a long-line of slavish sycophants who have done the dirty-work for those who eternally pledge allegiance to the darkness. Look at Adolf Hitler; look at Vladimir Lenin; look at Franklin D. Roosevelt and Woodrow Wilson; look at Saddam Hussein; and look at the Clintons and Bushes today. They all fit the same mold, and they all serve the same masters.

In this sense, Levy is leading his readers astray in the same fashion as are the neo-cons; for neither is giving the public the whole picture. What Levy should have done was remove George Bush’s name from his essay and substitute «the New World Order cabal.» Then his analysis and diagnosis would have been a much more accurate and valuable reflection of our world.

The key to remember is this: George Bush and his ilk are merely SYMPTOMS of evil; not the true CAUSE. If we really want the truth, we have to insist on looking further than what is standing right before us.

May the farce be with you, but not for long.
—Michael Moore, www.michaelmoore.com,mmflint@aol.com