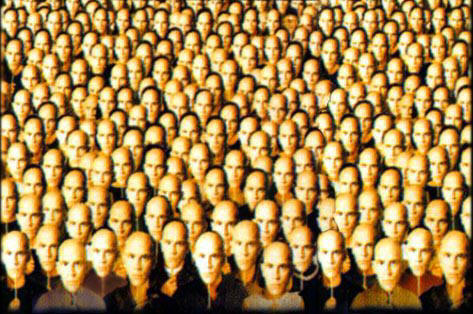 Taken from http://perso.wanadoo.fr/metasystems/ES/Manipulations.html .  Published in this website on December 23, 2004.  Translation to English by Luis Prada, Editor and Publisher of Brother Veritus’ Website.

This is a translation to English from the Spanish translation of the original French article «Stratégies de Manipulation».  There is no other known English version of this article except this one. See also the complementary articles «Reptilian Pact«, «The Holographic Prison«, «The Three Dark Tools of Domination» and «The New World Order, an Overview.»

All quotes from the text «Silent Weapons for Quiet Wars«.

1.  The strategy of distraction

The prime element of social control is the strategy of distraction consisting of deviating the public attention from the important problems and from the mutations decided by the political and economic elites by means of the flooding technique or the continuous inundation of distractions and insignificant information.

The strategy of distraction is equally indispensable to prevent the public from getting interested in the essential knowledge in areas of science, economy, psychology, neurology and cybernetics.

The Bush regime planned and executed the attack of the WTC on 9/11 to terrorize the American public and prepare it to accept the loss of their liberties with the implementation of the US Patriot Act and the establishment of the Homeland Security Department.

A similar strategy was used by the Nazi regime as will be explained next:

On March 23, 1933, the newly elected members of the Reichstag met in the Kroll Opera House in Berlin to consider passing Hitler’s «Ermächtigungsgesetz».  The «Enabling Act» was officially called the ‘Law for Removing the Distress of the People and the Reich.’

Opponents to the bill argued that if it was passed, it would end democracy in Germany and establish a legal dictatorship of Adolf Hitler. To soften resistance to the passing of the Enabling Act, the Nazis secretly caused confusion in order to create an atmosphere in which the law seem necessary to restore order.

On February 27, 1933, the Nazis burned the Reichstag building, and a seat of the German government, causing frenzy and outrage. They successfully blamed the fire on the Communists, and claimed it marked the beginning of a widespread terrorism and unrest threatening the safety of the German «Homeland.» On the day of the vote, Nazi storm troopers gathered around the opera house chanting, «Full powers – or else! We want the bill – or fire and murder!»

The Nazis used the opportunity to arrest 4,000 communists. Not only did the Nazis use the incident as a propaganda against communists but they also arrested additional 40,000 members of the opposition. Consequently, the Nazis had achieved their objective of eliminating democracy and ensuring their majority in the parliament.

This method is also known as «problem-reaction-solution«.  It creates a problem, a foreseen «situation» to provoke a certain reaction in the public in order to make this one the demanding force of measures that are desired to be accepted.For example: to let urban violence develop and intensify, or to organize bloody terrorist attempts in order for the public to demand laws of security or police-oriented ones in detriment of freedom.  Or also: to create an economic crisis to make accepted the backward movement of social rights and the breaking down of public services as a necessary evil.

3.  The strategy of degradation

To make accepted an unacceptable measure it is sufficient to apply it progressively, in a «degraded» manner, over a duration of 10 years.  It is in this way that radically-new socio-economical conditions have been imposed during the years 1980 to 1990. Massive unemployment, lacking, flexibility, relocation, salaries that no longer secure a decent income, so many changes that would have provoked a revolution should they be abruptly applied.

4.  The strategy of differing

Another way of making accepted an unpopular decision is to present it as «painful but necessary», obtaining the agreement of the public in the moment for the future application.  It is easier to accept a future sacrifice than an immediate one.  Firstly, because the effort is not deployed immediately.Next, because the public, the people, have always the tendency to naïvely hope that «all will go better tomorrow» and that the demanded sacrifice may be avoided.  Anyway, this allows more time for the public to be accustomed to the idea and to accept it with resignation when the moment comes.  Recent example: the move to the Euro and the loss of their economic and monetary sovereignty have been accepted by the European countries from 1994 to 1995 for their application in the year 2001.  Another example: the multilateral agreements of ALCA (or FTAA) that the United States have imposed in the year 2001 to the countries of all the American continent (Central and South America) in spite of their reticences, conceding an application and the coming into force in the year 2005.

5.  To address the public as children of younger age

The majority of the publicity «spots» addresses the public at large with the use of a discourse, arguments, personages, and a tone particularly infantile, many times near the weak, as if the spectator were a child of younger age or a mental handicapped.   The more it intends to seek the deception of the spectator or listener, the more it is its tendency to adopt an infantile tone.  Why?  If it is addressed to a person as if he or she had 12 year of age, then, by reason of suggestion, he or she would also have, with a certain probability, a response or reaction that is lacking of a critical sense same as is the case of a person of 12 years of age.«

6.  To utilize an emotional aspect rather than a reflection

To make use of the emotional aspect is a classic technique for making a short circuit to the rational analysis, and hence to the critical sense of individuals.  Besides, the utilization of the emotional registry allows us to open an access door to the unconscious to implant or to insert ideas, wishes, fears or worries, pulsations, or to induce behaviors.

7.  To maintain the public in ignorance and stupidity

8.  To promote in the public complacency with mediocrity

To promote in the public the idea that being stupid, vulgar and uneducated is «cool».

9.  To replace revolt with guilt

To make the individual believe that he himself is the only responsible for his misfortune, the cause of the insufficiency of his intelligence, of his capacities, or his efforts.  Thus, instead of rebelling against the economic system, the individual self-devaluates and self-blames, which generates a depressive state, one of its effects is the inhibition of action.  And without action, there is no revolution!

10.  To know individuals better than they know themselves

In the course of the last 50 years, the accelerated advances of science have generated a growing breach between the knowledge of the public and that one possessed and utilized by the leading elites.  Thanks to biology, neurology and applied psychology, the «system» has achieved an advanced knowledge of the human being, both physically and psychologically.  The system has been able to know the common individual better than what the individual know about himself.  This means that in the majority of cases, the system possesses a greater control and a greater power over individuals than what individuals have over themselves.

May the farce be with you, but not for long.
—Michael Moore, www.michaelmoore.com,mmflint@aol.com