Pilgrimageas a Way to Initiation

[Art Kompolt is aRosicrucian student, lecturer, instructor for the Rosicrucian Order and memberof the International Research Council of the Rosicrucian Order, AMORC.  Hespecializes in Alchemy.  I only add to this article the pilgrimage toancient Egypt done by hundreds of students of the Mysteries of the then knownworld. BV]

Pilgrims have traveled to far-awayplaces to visit  a cave, a shrine, atree or a magnificent Cathedral to resolve a self inflicted need. A pilgrimendures much hardship on his journey, sometimes barefooted, while others come with princely shoes.

This hardship is a process of  inner  inspectionand  self preparation. Thepilgrim’s progress depends entirely on an inner development until the quest is completed.  TheQuest is an inner, Initiation  processthrough ritual (the pilgrimage) and a psychological/mental/emotional upliftmentof the self/soul of the individual. Only the pilgrim KNOWS that he or she hasbeen initiated. It is a glorious and peaceful entrance to a higher sense ofconsciousness and well being with its Creator.

For centuries, men and women havetraveled over rough roads (life) to learn the real meaning for their existence and knowledge (WISDOM) of their place and reason forbeing here on this plane of existence.

The places where pilgrims traveldepends on their religion. In the East,  pilgrimsflock to the city of Benares to worship their Guru, Holy Man, or Shakti, the energy that caused the void to quicken intocreation (1).  In ancient times,pagan pilgrims traveled to  Delphito have communion with the Oracle.

Devout Moslem pilgrims go to Mecca tovisit the Ka’ba stone, which is  even  more famous than the Moslem Dome of the Rock. Numerous pilgrims go to Rome, or to Lourdes, where thousands in procession come for miraculous healing. Various tokenswere given as a sign of  pilgrimage,for example, a palm leaf was given to a pilgrim that had reached Jerusalem, a small  handkerchief of thecloth of Veronica for pilgrims to Rome, and a scallop shell to those that met the requirements as a pilgrim to Santiago deCompostella.

During Medieval times, the Crusades were considered as a  pilgrimage and to  reclaim Jerusalem forthe Roman Catholic Church. The Crusaders felt that they were on a mission, notonly for themselves but also for their faith.

Itis interesting that  in Spain thePope  had forbidden the  Spaniards to go on  Crusadesto the Holy Land  while letting the French, German and English  Knightsfight for Jerusalem.  Instead, thePope demanded that the Spaniards fight against the Moors in their own land. 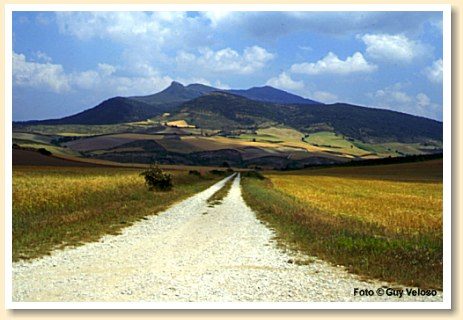 This order had the consequence of  prolong battles  withmany defeats  and  disappointments. It was only after a miraculous apparition of  Santiago (St. James) ina  white charge in the battle of Simancas whereKing Ramiro II conquered the Moors (2).

Thus, the legend of Santiago the Moorslayer grew through out Spain and into all Europe.

Never mind that this legend had been developed as  defenseby Quevedo in  1638 as a means to increase the prestige of the Spanish military because ofthe decline and   the failures against the Moors in Catalonia, Roussillom and Portugal (3).  Whether the appearance of St. James was real or not, is not the question.It is for certain that the Spaniards believed with heart and soul  that St.James had fought  with them againstthe Moors and that is all that mattered. As a result, the Order of the Knightsof Santiago de Espada  or theKnights of St. James  of Compostellawas born.

Let us focus into this legend and seehow it developed into one of the greatest  pilgrimagesites  of the Western world.

St. James the Apostle stands as one of the three  maindisciples of Christ.  Peter, Johnand James constituted an inner circle to whom Christ revealed himself more open than to all the other disciples.

St. James was tried by Pilate andsentenced to die.  He was killed with the sword. On the way to his martyrdom, St.James healed a paralytic and performed  miracles.

The stories of healing and miracles which have been given to St. James (Santiago) in Spain haveelevated him as the premier Patron of that country. His popularity producedmultitudes imploring him with prayers and offerings to get him to represent themto God.

Then came legend upon legend of whathappened to the body of St. James. That  thebody of St. James was taken to Spain with  sacred relics  is stated in the Bull of Leo XIII «Omnipotens Deus» of November 1, 1884 (4).

Eight hundred years passed since St.James was laid in a grotto at Iria, Spain and the discovery of his remains didnot  start until the beginning of the ninth century. During the reigned of  theGreat Alfonso III  (866-910),  the remains of  St.  James were ‘translated’ from  a monastery  churchto a specially built  Church.

This church was consecrated in 899and took thirty five years to build as a  beautifuland grand Cathedral in Compostella, Galicia, in the  North Western Coast of Spain.

Santiago’s popularity increasedwith time  even more than St. Martinof Tours  in France or that of St.Thomas of Canterbury in England.

The purpose of a pilgrimage to Santiago de Compostella was essentially  religious,to visit the home of a great man who was dead; possibly to look into his face oreven to hear his voice.  A pilgrimage was undertaken  with proper inner preparation as a means to gain grace. Thisgrace or blessing became a transforming initiation.

When a pilgrim thus inwardly preparedenters the  baroque Cathedral  at  Santiago deCompostella, as thousands before him have done, he is faced with blue and gold of the sanctuary gates, and  looking down the aislesbetween the stout stone columns, he comes face to face with  the tomb of the saint. The tomb of the saint is in a smallchapel below the altar (5). It is all of silver as is also the statue of St. James above a ratable.

The pilgrim can go through the backof the altar up some steps and be standing in back of the statue of St. James. This is the moment of truth and ofrevelation. Placing one’s hands on the shoulders of the Saint, inwardlymeditating as to the meaning of this moment, the realization comes that all thetrials and tribulations of the pilgrimage trail have been but a speck of timecompared to the infinity of time.  Anindescribable  presence and feeling of serenity surrounds the pilgrim.

All troubles and petty thoughts are dismissed and only the permanence of something bigger thanthe pilgrim is evident. With thankful tears of joy the pilgrim thanks theAlmighty for the revelation of peacefulnessand love.