First published in this website on November 26, 2003.  Updated on February 20, 2004.
Beloved Ascended Master Saint Germain Foresaw NESARA.  Excerpts from book "Unveiled Mysteries", copyright 1939, and the book "I AM Discourses", both byGodfre Ray King.  Quotes from conversations with Beloved Ascended Master Saint Germain.  Compilation by Beloved Dove of Oneness sent in her Dove Report of November 21, 2003.

Mistakenly the peoples of the world harbor a distrust in the American people.  Instead, all the countries should love the United States as much as Beloved Ascended Master Saint Germain loves them.  What has brought hate and mistrust to this country in general is a result not necessarily due to the thinking and actions of the majority of the American people, the common folks, who has been victimized and manipulated, and not necessarily due to its military forces who have been infiltrated, brainwashed, mind-controlled and in all cases deceived in the motives of war in the name of patriotism and nationalism by the Sinister Forces, as are to some extent other peoples of the world.

It is granted than in some cases some people enlisted in the military because they were looking for a legal way to kill or torture others, but the main cause of atrocities of war, as in the torture and killing of innocent unarmed civilians, is the result of the fear of being in an occupied hostile territory which turns solders insane, violent and killing machines, piling up more hostility and hate against them, violence creates more violence.  These soldiers bring home trauma and sickness from the weapons the government used in the war.

But there is an underlying cause behind the above that generates the maligned sentiment towards the United States and that is the result of the terrorism, take over and occupation of foreign lands, war-for-oil and world financial recessions perpetrated by the corrupted Illuminati in power who will be destroyed.  See "The Holographic Prison" at:http://www.luisprada.com/Protected/the_holographic_prison.htm .

The fate of other countries is closely tied to the fate of the United States because of the tentacles of the banking and financial systems.  These Dark Forces behave as nationalistic and patriotic in front of the public when in reality they are globalists, and care less for the United States —even if she is their homeland— as they care for any other country.  Know Who Are Thy Enemies.  The beginning of the crumbling of the Illuminati Evil Empire will start with the proclamation of NESARA!  The fall of the Evil Empire —Illuminati/Reptilian Renegades— will be celebrated on planet Earth as well as on other planets of the galaxy and by the Ashtar Command similarly as the celebration shown at the end of the "Star Wars" movie saga.  The Force Will Prevail, Jedi Light Warrior, Trust Thy Instincts!

"Many changes were shown to take place in the next seventy years [1930s — 2003]. These affected Europe, Asia, India, North and South America, and revealed to us, that regardless of all appearances at the present time, the SINISTER FORCE attempting to create chaos and destruction throughout the world, WILL BE COMPLETELY DESTROYED. When that is accomplished the mass of humanity will turn to the "Great God Presence" within each heart and also governing the Universe. "Peace shall reign on earth —and man send out good will to man." This revelation was stupendous. The closing scenes followed next and these concerned principally the United States in the next century. [Year 2000+] The progress and advancement she will make is almost unbelievable."

"Many of these inventions", explained the Master [Saint Germaine], "will come into use on earth in the Golden Crystal Age we have now entered.  Some of the principal inventions that are to be utilized on earth were explained and could humanity have seen them, it would take heart and be tremendously encouraged in regard to the future."

From the "I AM Discourses":

"…let the Full Divine Justice reign throughout the land in all official places. See that all authority is in the hands of Thy trained and trusted Messengers; that they may govern fully all governmental offices in America, and be ever divinely sustained; that America be healed, blessed, and forever prosper; that all sinister influence be consumed and forever repelled from within the borders of America." 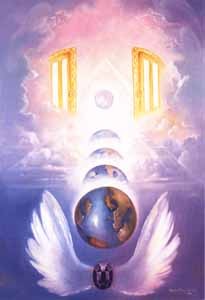 "The Divine Plan for the future of North America is a condition of intense activity in the greatest peace, beauty, success, prosperity, spiritual illumination, and dominion. She is to carry the Christ Light and "Be" the Guide for the rest of the earth, because America is to be the heart center of the "Golden Age" that is now dimly touching our horizon.  The greater portion of the land of North America will stand for a very long time. This has been known for thousands of years, yes! for over two hundred thousand."

"In your beloved America, in the not so far distant future, will come forth a similar recognition of the Real Inner Self, and this her people will express in high attainment. She is a Land of Light, and Her Light shall blaze forth, brilliant as the sun at noonday, among the nations of the earth. She was a Land of Great Light, ages ago, and will again come into her spiritual heritage, for nothing prevent it. She is strong within her own mind and body —stronger than you think; and that strength she will exert to rise out of, and throw off from border to border, all that weighs heavily upon her at the present time.

"America has a destiny of great import to the other nations of the earth, and Those who have watched over her for centuries still watch. Through Their protection and Love, she shall fulfill that destiny. America! We, the Ascended Host of Light, love and guard you. America! We love you.

"A similar form of perfect government will come at a later period, when you have cast off certain fetters within that hang like fungi, and sap your strength as a vampire. Beloved ones in America, be not discouraged, when the seeming dark clouds hang low. Every one of them shall show you its golden lining. Back of the cloud that seems to threaten, is the "Crystal Pure Light of God and His Messengers, the Ascended Masters of Love and Perfection" watching over America, the government, and her people. Again I say, "America, we love you."

"One by one, great awakened souls are coming forth who will become clearly conscious of their own mighty, inherent God-Power, and such as these will be placed in all official positions of the government. They will be more interested in the welfare of America than in their own personal ambitions and private fortunes. Thus, will another Golden Age reign upon earth, and be maintained for an aeon."